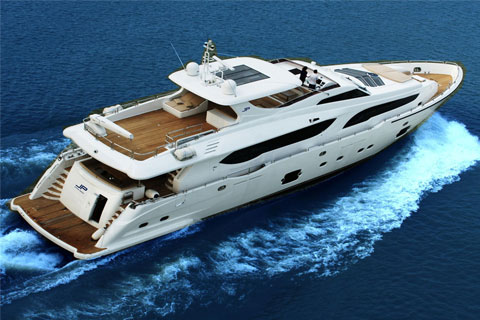 (Hong Kong) – On a sunny day, the Mingfa superyacht sails around the Hong Kong coastline, its owner, a Chinese billionaire, basking in the sunshine on the upper deck as he appreciates the island's unique skyline.

In the evenings, he can be found nibbling on snacks made by chefs from Michelin-starred restaurants in between crooning his favorite songs in the purpose-built karaoke room.

Welcome to the latest must-have plaything of China's super-rich.

Starting at 24 meters long and stretching up to as much as 180 meters, superyachts are the most expensive luxury yachts on the market. Manned by a full-time professional crew and with as many as six separate decks, they come equipped with a swimming pool, luxury guest cabins or suites with en suite bathrooms, several saloons and dining rooms, a cinema, gym, Jacuzzi and a sun deck. Some even have a pad to land the owner's private helicopter.

As the country with the most billionaires in the world, China has become a magnet for yacht manufacturers, foreign and domestic alike.

"They buy one, two, three, four, five houses, then they go to buy a private jet, then they go for a yacht," said Nizar Tagi, general manager of the Asian operations of Italian luxury-yacht maker Benetti.

Headquartered in Viareggio in northern Tuscany, the company opened its Asian office in 2011. Of the 16 superyachts sold by Benetti Asia in the past five years, about 10 were purchased by Chinese, Tagi said.

The cheapest superyacht costs around 60 million yuan (US$ 9 million) and owners pay an additional 10 percent a year for maintenance, Tagi said. Many owners sell their yachts and buy a new one every three to four years.

"Sunseeker is well-placed to take full advantage of opportunities in China, one of the world's fastest-growing luxury yacht markets," Wang Jianlin, chairman of Dalian Wanda, said at the time.

However, Jonathan Beckett, chief executive of Burgess Yachts, a UK-based yacht brokerage, is more cautious about expanding into China. When deciding on location for the company's first office in Asia, Beckett chose Singapore rather than China because "we want to put our toe in the water and make sure we've got everything ready for when the market will take off, which it will do," Beckett told Wealth-X, a wealth and luxury markets research firm, last year.

He predicts that it will take the superyacht market seven to 10 years to fully take off in China but "once a few people become interested in buying and chartering, others will follow."

Among the main challenges faced by superyacht makers in China is the dearth of marinas and trained crews, Tagi said. To help solve that problem, Benetti is itself building marinas in Shenzhen and on the southern island of Hainan, an hour's flight from Hong Kong and China's equivalent of Hawaii.