GSK Victory a Shot in the Arm for HPV Vaccine 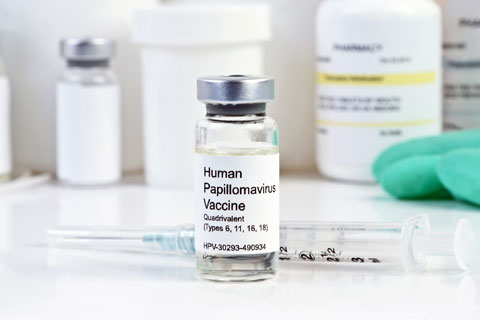 (Beijing) – For the first time, China's drug regulators have given a green light to the commercial sale of a vaccine designed to protect women and men against the human papillomavirus (HPV).

The decision opened a door for multinational and Chinese pharmaceutical manufacturers that are now preparing for a market potentially worth billions of U.S. dollars.

Britain's GlaxoSmithKline (GSK) said July 18 that its HPV vaccine Cervarix had been approved for sale on the mainland by the China Food and Drug Administration, and that the product would likely be available across the country early next year.

The announcement came a decade after U.S.-based Merck & Co. introduced the first HPV vaccine in the United States.

Currently, Cervarix and Gardasil, which is produced by Merck & Co., are the only globally available products for HPV immunization. Combined sales of these drugs topped US$ 2 billion last year, according to pharmaceutical industry information provider Evaluate Pharma.

Merck has applied to sell Gardasil in China and is now awaiting a regulator decision, which could come by the end of August. At least three Chinese companies have also asked the drug administration to allow clinical trials for their HPV vaccines.

Brands of the vaccine are now sold in more than 160 countries worldwide as a safeguard against the sexually transmitted virus, which can lead to cervical and genital cancer, according to the U.S. Centers for Disease Control and Prevention.

According to a report by the brokerage Shanghai Securities, China may become a huge market for HPV vaccines, since about 117 million people are in the vaccination age bracket of between 9 and 25 years old. The report said the market could be worth more than 35 billion yuan.

After breast cancer, cervical cancer is the second-most common cancer among Chinese women, according to researchers at Cancer Hospital in Beijing, a unit of the Chinese Academy of Medical Sciences. About 70 percent of cervical cancer is caused by HPV.

Moreover, according to the Chinese Center for Disease Control and Prevention, China is home to the world's largest single group of cervical cancer patients. More than 28 percent of the sufferers worldwide are Chinese.

HPV vaccinations are compulsory or subsidized in many of the world's countries and regions, including U.S., Britain, Japan and Hong Kong.

But China's regulators have delayed the introduction of HPV vaccines on the mainland. Sources close to GSK and Merck told Caixin each company applied but failed to win drug administration permission to sell a vaccine in 2006 and 2007, respectively.

GSK said about 6,000 mainlanders participated in clinical trials for Cervarix that started in 2010. The tests found the efficacy rate consistent with global results.

The state-run newspaper People's Daily reported in late July that Merck started mainland clinical trials for Gardasil in 2009 and submitted its findings to regulators in 2013. But the regulator has yet to make a decision, the report said, because Merck's patient sample size was too small.

A drug administration official who declined to be named told Caixin every foreign-made vaccine product must undergo domestic clinical tests before getting a thumbs up or a thumbs down from regulators. These tests may take years, which means up to eight years may pass after a license request before a new drug hits the market.

"The complicated approval procedure and a lack of personnel for conducting assessments has hurt the efficiency (of the drug review process) and delayed drug imports," said the official.

Some health experts in the past called for an easing of HPV vaccine testing rules. In a 2013 report, Chinese Academy of Medical Sciences Professor Qiao Youlin said that if not for the rules some 380,000 women could have been immunized.

Some Chinese consumers eager for an HPV vaccination in recent years have gotten around the restrictions by traveling to Hong Kong or abroad to countries where Cervarix and-or Gardisil are sold. Others bought vaccines from Hong Kong sellers through Chinese e-commerce websites, Caixin learned.

Domestic drug makers eyeing the HPV vaccine market include Walvax Biotechnology Co., Xiamen Innovax Biotech Co. and Zhejiang Pukang Biotechnology Co. Each has applied for permission to conduct clinical trials for their own versions of the vaccines, which analysts said should be less expensive than foreign brands.

Separately, Chinese pharmaceutical dealers are in line to benefit from the arrival of Cervarix.

GSK has hired Chongqing-based Zhifei Biological Products Co. as an exclusive Cervarix dealer, in charge of all marketing and sales in China. Zhifei has agreed to buy 1.14 billion yuan worth of Cervarix in the product's first year on the Chinese market, and increase that amount to 1.5 billion yuan in the second year and 1.9 billion yuan in the third year.

The base price for a Cervarix vaccination has not been announced. One analyst who asked not to be named told Caixin the three-dose vaccine would cost less than 1,000 yuan.

GSK said it's working with the Chinese government on a plan that would make it easier for women up to age 25 to be immunized. The plan might include adding the vaccine to a government-subsidized immunization program.

"We are ready to explore an innovative pricing approach to support Cervarix's inclusion into public, cervical cancer immunization programs," said Hervé Gisserot, the general manager for GSK in China.

But Liu Wei, a health industry analyst at China Investment Consulting, said he expects China-GSK negotiations focusing on an immunization program to take more than one year.

Some analysts say Cervarix's inclusion in a national immunization program would encourage the drug maker to hold down the vaccine's price, which in turn would expand demand for the product in China. Another positive effect, Liu said, is that it could help win more business overall for GSK in China.

GSK wants a foothold on the HPV vaccine market in China before Merck's product is approved. A Southwest Securities report said Gardasil could get a thumbs up before September.

Gardasil already dominates the global HPV vaccine market, with a 94 percent share last year, according to Evaluate Pharma. Merck's product is often favored over the GSK drug because it's considered more efficacious.