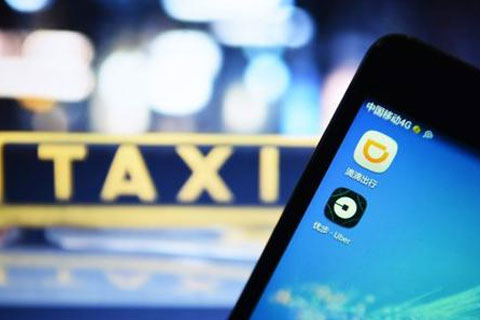 (Beijing) – The nascent online car-booking industry in China went through a watershed moment, first with the government opting to legalize it on July 28, and two titans – Did and Uber – announcing plans to join forces a few days later.

Experts say rules that lifted a cloud of regulatory uncertainty hanging over the industry would also serve as a benchmark for anti-trust regulators probing the US$ 35 million deal announced August 1, between Didi Chuxing Technology Co., the country's largest online car-hailing app by orders, and the Chinese arm of global heavyweight Uber Technologies Inc.

Uber China's surrender to Didi puts an end to years of bruising battles where both have bled money for a stake in China's booming ride-share market. Didi, confirming the deal, said its San Francisco-based rival would own 17.7 percent of Didi, with other existing investors in Uber China, including search giant Baidu Inc., taking another 2.3 percent.

Didi will also invest US$ 1 billion in Uber as part of the deal, according to people with knowledge of the matter.

This unexpected marriage between once sworn enemies has left the industry with bated breath, as they wait to see whether China's Ministry of Commerce would green light the union that would have far-reaching consequences.

In response to a Caixin query, Didi said August 1 that both Didi and Uber China have not turned a profit and, therefore, they don't need government approval for the deal.

However, the Ministry of Commerce, one of the country's anti-trust regulators, said August 2 the merger "can't proceed if they (the two companies) don't apply for permission."

The National Development and Reform Commission, the country's top economic planner, said August 3 it would also probe the deal to see whether it would create a monopoly, state-run Xinhua News Agency reported.

Although Didi has been burning money since the launch in 2012, the company has cornered the domestic ride-sharing market. It received over 85 percent of all online orders for car hires in China in the first three months of this year, followed by Uber's 7.8 percent, data from Internet information provider CNIT showed. Didi also raked in US$ 7.3 billion in its latest round of fundraising from investors including Apple Inc., adding to its list of powerful backers that include e-commerce giant Alibaba Group Holdings Ltd. and social media operator Tencent Holdings Ltd. Other smaller domestic players such as Yidao Yongche, backed by search giant Baidu, and Shenzhou Zhuanche have a small footprint in this emerging industry, which is expected to be valued at 500 billion yuan by 2020, according to Munich-based consulting firm Roland Berger.

The exercise of deciding whether the merger of the two biggest players in the field would create a monopoly requires a detailed and precise interpretation of the government guidelines, which will take effect on November 1.

The rules issued jointly by seven government departments on July 28 spell out new licensing and insurance requirements for car-hailing firms, and lays down the regulatory framework for the industry that had operated in a legal gray zone for over two years. On August 1, the Ministry of Transportation issued another set of draft rules that fleshed out the compliance requirements.

The guidelines say online car-hailing services should apply for a business license from local governments in the cities and provinces they operate in, and special vehicle registration licenses and drivers' licenses for those who want to pick up passengers, which are different to those issued to private car owners. Companies must ensure that drivers do not have a criminal record and have at least three years of experience.

App operators must also sign contracts with registered drivers and offer them motor insurance including third-party coverage to protect passengers, the rules said.

The final version of the rules, however, has dropped the requirement for private cars offering rides to obtain a taxi license. The clause included in an October draft was criticized for being too strict, with potential to stifle the industry. The old draft also needed vehicles to be taken off the road after eight years due to safety concerns, but the latest guidelines have relaxed the condition, saying cars that haven't traveled 600,000 kilometers in eight years are still valid for private use, an adjustment which gives part-time drivers more flexibility, market analysts said.

Both the guidelines and detailed rules aim to minimize frictions between the Internet-based ride-sharing firms and the traditional taxi industry. In recent months, taxi drivers have taken to the streets in several cities including Nanjing and Shenyang, saying car-hailing apps engaged in unfair competition by heavily subsidizing drivers and doling out steep discounts to riders.

The transport ministry has banned private drivers from patrolling the streets in search of customers, or picking up passengers at taxi stands at airports and railway stations.

The government, however, has not stopped ride-sharing firms from subsidizing drivers and offering discounts to passengers, the biggest issue raised by rival taxi companies. But the policy states fares for rides booked online cannot fall below cost.

Several sources in the online car-booking industry said the new rules will not affect their pricing strategy because they don't operate below cost. The real problem was taxi fares were too high, they said.

On the same day the new rules for the online car-hailing industry were released, the State Council, China's cabinet, issued guidelines to push for reforms in the taxi industry. The key change orders taxi companies to cut the monthly fee that drivers had to pay them for insurance and maintenance.

The reforms will allow taxi companies to compete with ride-sharing services and even encourage them to start Internet-related business, said Cheng Shidong, a transportation industry expert at the National Development and Reform Commission. Some taxi drivers already use Didi's platform to find customers, blurring the line between traditional taxi services and online ride sharing.

Local governments have been left to decide how to implement the broad framework laid out by the center. The merger between Uber China and Didi has raised a new challenge for authorities who now need determine whether Internet-based car hailing is an independent technology-driven industry or part of the overall taxi sector.

The new rules classify ride-sharing services as "Internet-booked taxies" providing "differentiated" services. If regulators adopt a narrow interpretation and define the industry as limited to Internet-driven firms catering to transportation needs, "it seems all but certain that the merged entity will monopolize the market," Chen Yongwei, a market researcher at Peking University, wrote in a commentary on Caixin's Chinese website.

But regulators could also view the Uber-Didi entity as another player in the larger taxi industry, said Fu Weigang, a researcher at Shanghai Institute of Finance & Law. "If authorities consider the merger as a normal cab company, then from this perspective, the combined entity doesn't have a big share of the (taxi) industry," he said, and therefore the deal will not be scuttled by anti-trust regulators.

The Ministry of Commerce and the NDRC will also see whether the merger prevents new players from entering the ride-sharing market by pushing up the entry barrier, said Xue Zhaofeng, a professor at Peking University's National School of Development. Meanwhile, regulators can also choose to see Didi as a part of the overall transportation landscape in a city, said Xue, and if they opted for this broad definition, then public transport options such as subway trains and buses would become possible low-cost alternatives for clients, weakening the case to call the car-hailing juggernaut a monopoly.