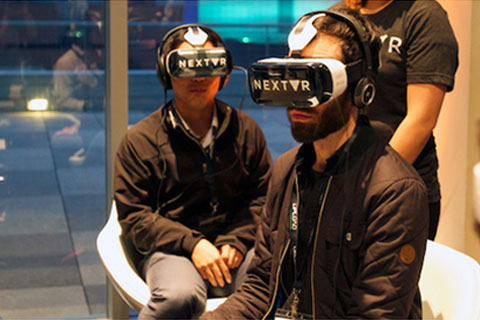 (Beijing) – China Media Capital, a private equity and venture capital firm, has invested in a California-based virtual reality start-up NextVR Inc., marking its second investment in the nascent technology in less than 10 months.

China Media Capital (CMC), controlled by Chinese media mogul Li Ruigang, said in a statement on August 8 that it invested an undisclosed amount in NextVR during its second round of funding where the startup plans to raise US$ 80 million.

NextVR, established in 2009, has grabbed the attention of Chinese investors with its technology used to broadcast live games from the U.S. National Basketball Association and the National Football League using VR technology. It also teamed with the U.S. news channel CNN to broadcast an onscreen debate with Democratic presidential candidates in late 2015.

CITIC Group Corp.'s subsidiary CITIC Guoan Information Industry Co. Ltd., a cable television services provider, invested US$ 20 million for a 2.27 percent stake in the startup in June. NextVR was valued at US$ 800 million, said CITIC Guoan in a filing to the Shenzhen Stock Exchange.

However, the start-up lost US$ 9.1 million last year and burned another US$ 4.6 million in the first three months of this year, according to CITIC Guoan's statement.

CMC's decision to invest in NextVR came three months after one of its subsidiaries, Whaley Technologies Co. Ltd., an Internet TV seller, inked a partnership with the American company to develop VR technology for the live broadcasting of sports events.

China's VR market is expected to triple in size this year to 5.7 billion yuan (US$ 850 million) from 1.54 billion yuan in 2015, market research group iResearch said. Chinese companies including big names such as Alibaba have poured millions of dollars into this nascent field. From January 2014 to January this year, Chinese domestic VR companies received 2.13 billion yuan from investors, iResearch said.