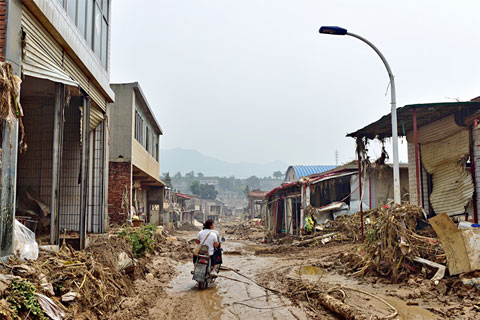 (Wuan and Xingtai, Hebei Province) - On the day Ma Zengping saw his father, his eldest son and his daughter swept away and drown in the disastrous flooding in Hebei and Henan provinces, tragedy started with a loud bang outside the door.

At around 5 p.m. on July 19, the family heard the crash of a large metal drum as it hit something in the yard. Ma's father opened the door to see what had happened.

"Lao Er…" he said, using the expression for second son. They were the last words Ma heard from his 74-year-old father, who was sucked out the door and swept away by the surging waters.

The torrent quickly burst in the door and through the house, carrying Ma, his wife, two sons and one daughter out into the yard, where they tried to keep together by holding each other's hands. They were soon swept away to a nearby coal processing factory where they tried to cling to a power pole, Ma said. For the next 30 minutes, they struggled to hold on to the pole as they watched dead pigs, goats, cows and other objects wash past.

"Dad, I can't do it anymore," Ma's exhausted 16-year-old daughter cried. She lost her grip and was swept away. So, too, was his oldest son, who tried to grab his sister, but was also taken by the surging waters.

Ma, a farmer in the rural town of Majiazhuang in Wuan in Hebei province, is one of hundreds of families who lost relatives in last month's flood.

Incessant rains that started in northern China on July 18 affected over 9 million people or about 12 percent of the population in Hebei as of July 23, data from the provincial government showed.

The worst flood to hit Hebei and Henan Province in decades has killed 130 in Hebei alone and 110 more were unaccounted for as of July 26, according to provincial authorities. Authorities have not provided any update ever since.

The central authorities said the high toll of dead and missing was in part caused by a lapse in official vigilance against flooding in a region that has not seen a major flood in two decades.

According to some experts, a lack of enforcement by local authorities led to rampant development and illicit farming along the flood plain close to the river, which made the area prone to disaster.

In addition, many residents of the area said they did not receive a flood alert or that a warning came too late for them to save themselves.

Yang Xiaodong, a vice director of the China National Commission for Disaster Reduction, during a news conference in Beijing late last month criticized some local officials for being ill-prepared. He also blamed illicit excavation and the construction of homes and farmland on dried-up riverbeds for the high death toll.

Under the 1998 Anti-flooding Law, construction projects and farming activity are prohibited in restricted areas next to lakes, rivers and reservoirs and in the riverbed.

However, the law is rarely enforced, particularly along many smaller rivers in northern China, including in Hebei, where waterways had dried up during years of drought, according to Wu Xianbing, a scholar specializing in hydro engineering at the Agricultural University of Hebei.

Moreover, tens of thousands of smaller rivers across the country are left in the care of township governments and even village authorities, which do not have the manpower and resources to enforce the law, according to Cheng Xiaotao, who serves on a national committee under China National Commission for Disaster Reduction.

Daxian village, home to 2,000 residents, located in the Economic Development Zone in the city of Xingtai, was among the areas with the highest number of casualties. Nine residents, including five children, were killed or went missing when the village was inundated due to a breach on a bank along the Qixing River in the early hours of July 20.

Part of the riverbank was dug up to make way for construction workers to lay pipelines for the city's winter heating system. That digging caused the breach, according to several local villagers.

The segment of the river that passes through the village was less than 20 meters wide and earth excavated during the digging and pipelines left in the area had obstructed the waterway, contributing to the sudden overflow, according to locals.

Some villagers also complained that they had not received a flood alert at all or the warning came too late.

"I was woken up by a roaring sound at about 2 a.m. Then I saw water gushing into my house and within a minute, the water level rose to nearly two meters," one villager told Caixin. "I rushed to find a ladder to climb onto the rooftop, and then I saw my car being washed away," said the man who asked not to be named.

Authorities have given conflicting accounts about whether they sent out alerts for local people to move out of low-lying areas.

Jiao Lijun, head of the Xingtai Water Bureau, and who oversaw anti-flooding operations said that his office indeed issued such a notice on July 19, though he said he could not remember the exact time.

However Zheng Jianping, head of water authorities in the city's the Economic Development Zone told local media that they never received an order.

"We dare not to issue such an order on our own because we worried about public panic," Zheng was quoted as saying.

One official overseeing flood control work in the town of Dongwang told Caixin that they did not hear of any instructions from city government. An official from the development zone who was touring the area finally took the liberty to issue an evacuation order as water in the river rose quickly at around 2 a.m. on July 20, he said.

"It was too late to go door-to-door to inform people and instead, we had to use the loud speakers to get the message across," said the official who asked not to be named. "But it's too late and too little to help the locals," he said.

Ma, the farmer in Majiazhuang who lost three members of his family, said that about 1 p.m. fellow villagers noticed a small stream of water flowing through the usually dry riverbed that passes through the town.

By about 4 p.m., the water level rose above several meters, but the villagers had not received an order to evacuate.

Barely an hour later, the family heard a loud bang outside, and the elder Ma opened the door to investigate.