By Wang Qionghui and Chen Na 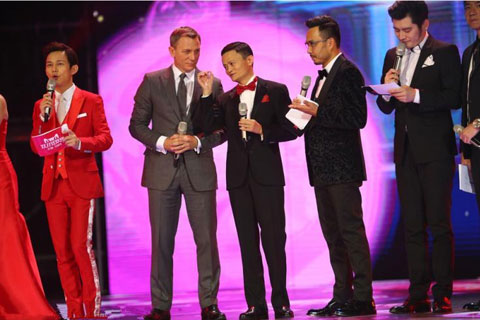 (Beijing) – A consumer goods maker in Shanghai has paid hundreds of millions of yuan for co-branding rights to a live, televised performance hosted by Alibaba for its major online shopping day, the e-commerce giant said on August 16.

The day, created by Alibaba's billionaire founder Jack Ma, is promoted as a time for singles to pamper themselves. Sales on Tmall.com crossed the 10 billion yuan mark in less than 13 minutes in 2015, compared to 38 minutes in the previous year, the company said. Deals worth 91.2 billion yuan were made in 24 hours in 2015, it said.

The variety show, which debuted last year, mimics the format of the popular Spring Festival gala on the eve of the Lunar New Year. Featured celebrities on the show included British actor Daniel Craig, who has played the title role in James Bond franchises for over a decade.

Independent ratings agency Kuyun said nearly one-third of all TV viewers on the night of November 10 watched the live event. Many others streamed it online.