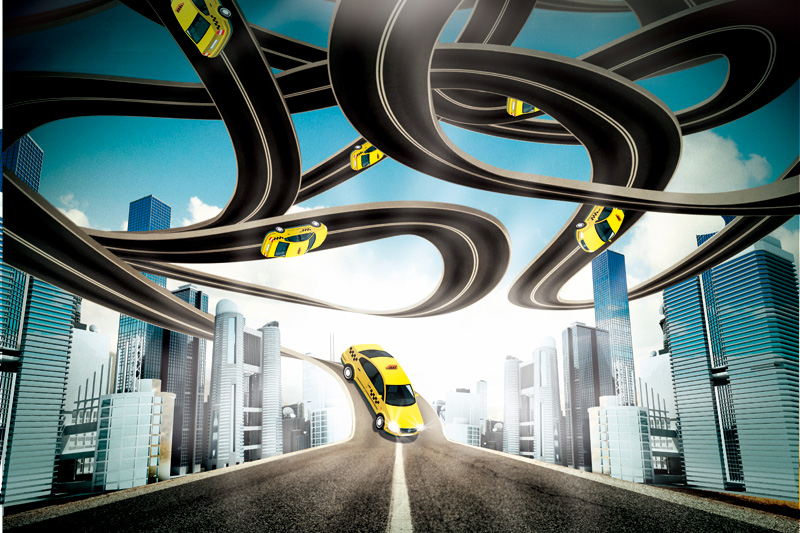 (Beijing) – New regulations and a blockbuster merger between the industry's largest players are reshaping the business landscape for China's car-hailing app companies.

And the landscape is widening as car-hailing companies including Didi Chuxing Technology Co., which merged in August with Uber Technologies Inc.'s China unit, explore financial services such as vehicle leasing and auto insurance. Future growth areas may include car dealerships.

The industry is reshaping – and maturing – in the context of a new legal environment. Regulations jointly issued by seven, central government departments in July set up a regulatory framework for the nascent industry, spelling out requirements on issues such as drivers' qualification and vehicle licensing. The latest rules also, for the first time, grant nationwide legal status to car-hailing companies, which for years were allowed to operate in a legal gray zone.

Some analysts say the rules, which take effect November 1, were a driving force behind the Didi-Uber China merger, through which Uber relinquished control of its mainland operations in exchange for a 20 percent stake in the Chinese company and US$ 1 billion. Didi got a 1.47 percent stake in U.S.-based Uber.

Industry watchers say the deal may have been hastened by concerns that open-end clauses in the government's new rules could leave room for regulators to restrict car-hailing in the future.

In an interview with Caixin, Didi President Liu Qing said her company hopes to expand business territory into new-vehicle buyer financing, bus transportation services, auto insurance and others. Some new business in consideration may be backed by some of the institutional investors already supporting Didi and Uber, such as an auto insurance business through a partnership with China Life and an overseas car booking service for Chinese travelers who carry credit cards issued by China Merchants Bank.

A car-hailing provider that specializes by serving business and wealthy customers, Shenzhou Zhuanche, is planning to branch out by opening a chain of auto dealers, vehicle maintenance shops, and other services, said company CEO Lu Zhenyao. Shenzhou is a subsidiary of China's largest car rental company, CAR Inc.

The government's new car-hailing industry rulebook, which will be enforced by Ministry of Transport, gives local governments the power to control car-hailing businesses within their jurisdictions according to local conditions. A government may, for example, set quota for vehicles working for online car-hailing platforms.

Companies will have to compete against each other for local government licenses, said a staffer working for Didi's government relations office who asked not to be identified. He added that Didi will get preferential treatment over rival companies in some jurisdictions after signing agreements with local governments.

The Didi-Uber China merger and new legal conditions are also having an impact on company financials, particularly the enormous spending levels tied to subsidized services. Across the country, companies spent more than they were earning as part of a strategy aimed at winning loyal customers and beating the competition.

After abandoning subsidies in March, Lu said, Shenzhou turned a profit. Shenzhou is a unique company, though, as its upscale riders are willing to pay about 20 percent more than a traditional taxi fare. Most car-hailing customers have been lured away from taxis with fares held down by subsidies.

In March 2015, Uber CEO Travis Kalanick pledged his company would subsidize its China business to the tune of US$ 1 billion. The strategy apparently worked: A car-hailing industry investor who asked to remain anonymous told Caixin that Uber China's business soared after it started paying each of its drivers an average 6,000 yuan bonus every week.

Between 2014 and this summer, anonymous sources close to Uber China told Caixin, the U.S. company invested US$ 2.5 billion to get its China business rolling.

In part due to subsidies paid to match its competitors' subsidies, Liu said, Didi has been making money in only about half of the 400 cities where the company operates. Uber China served more than 60 cities.

Now that Didi may no longer needs to subsidize operations to keep pace with Uber China.

Didi plans to end driver subsidies soon, while Uber China in August cut its subsidy levels in half in some cities, an employee who works for Didi said.

But Yidao founder and chief executive Zhou Hang said an end for subsidies may drive away some car-hailing customers since many "are very price-sensitive."

In fact, Yidao appears unwilling for now to stop subsidizing its services. The race for car-hailing passengers factored into a company decision to launch a subsidy program last year, after the electronics and technology company LeEco bought a 70 percent stake for US$ 700 million in October.

But even if Yidao alone keeps the subsidy ball rolling, analysts predict the amount of cash doled out by car-hailing companies will decline in the wake of the Didi-Uber China merger, which created a company with an estimated market capitalization of US$ 35 billion.

Indeed, Didi needs cash. According to company financial documents obtained by Caixin, Didi lost 12.2 billion yuan last year. Most of the company's revenues came from ride fees and advertising. Shortly before the merger was announced, Didi completed a round of fundraising totaling US$ 4.5 billion from investors including Apple Inc, China Life and Alibaba Group.

With the merger completes, Didi is preparing for a public listing on a U.S. stock market in 2018, Caixin learned. The company predicted to post a US$ 540 million profit this year, according to company documents for investors.

The merged company controls more than 90 percent of China's car-hailing market as measured by orders handled, according to business data provider Research in China.

Rumors about a possible deal to combine Didi and Uber China started circulating in early 2015, shortly after Didi emerged from a tie-up between Tencent Holdings-backed Didi Dache and Alibaba Group-invested Kuaidi Dache.

Several major investors have gotten behind Didi as well as Uber. Investing in both companies were BlackRock, Hillhouse Capital Group, Tiger Global Management and China Life. Some of these investors reportedly urged the companies to end their money-losing subsidy activities and combine forces.

Actually, according to knowledgeable sources, Didi early this year started gradually cutting its subsidies in some cities.

Without ride subsidies to encourage business, the post-merger Didi and other car-hailers may lose drivers. A survey of drivers conducted by Tencent on Didi's behalf found only 50 percent would be willing to continue working without subsidies.

Meanwhile, Didi faces the challenges of integrating an unknown number of Uber-China's 800 staffers, many of whom were stunned by news of the merger.

"I was astonished," said Li Han, an office intern at Uber-China's Wuhan department. "Everyone on the staff was shocked and soon felt depressed."

Uber announced a bonus package for its China workers after announcing that all would be transferred to Didi. Caixin learned from sources close to Didi that the company is negotiating with Uber China employees.

A Didi executive said Uber China's mid-level managers have accepted the change, but many lower level staff members have resisted. Meanwhile, Yidao and Shenzhou have been recruiting former Uber-China employees in hopes of improving their chances in the race against Didi.