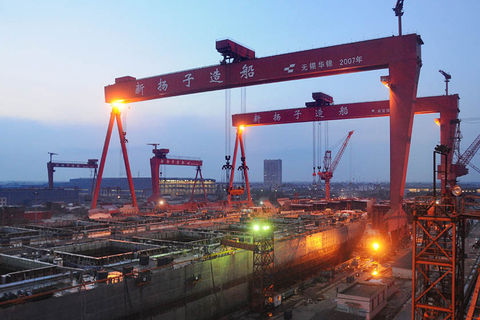 (Beijing) – China's largest private shipbuilder Yangzijiang Shipbuilding Holdings has laid off 6,000 workers last year and plans to cut another 2,000 jobs this year, amid dwindling profits as new orders have dried up, an internal company document seen by Caixin said.

The layoffs will trim 28 percent of the Singapore-listed shipbuilder's 28,000-strong workforce as of early 2015, sources close to the company told Caixin.

Yangzijiang, which become the country's largest private shipbuilder after Rongsheng Heavy Industries Group Holdings stopped production in early 2015, reported a 50 percent decline in net profit year on year to 863 million yuan in the first half. Revenue dropped 35 percent to 5.7 billion yuan over the same period, the company's financial report showed.

"The layoffs are cruel but it is a last ditch effort as the company attempts to adapt to the harsh market conditions," said an employee who declined to be named.

The company operates three shipyards in the eastern province of Jiangsu, with an annual shipbuilding capacity of 6 million deadweight tons (TDW).

Chinese shipbuilders have been struggling with overcapacity and empty order books as the global shipping industry continues to lose steam. From January to July, the total carrying capacity of ships built at shipyards across the country stood at 19.2 million deadweight tons, down 15.4 percent compared to the same period last year. By the end of July, shipbuilders had contracts for 117 million TDW of new ships, down 14 percent year on year.

A shipbuilding industry analyst told Caixin that private shipyards were the worst hit amid falling demand and margins and were more prone to go belly-up, compared to their state-owned counterparts that were propped up by government subsidies.