By Liang Ruiyao and Han Wei 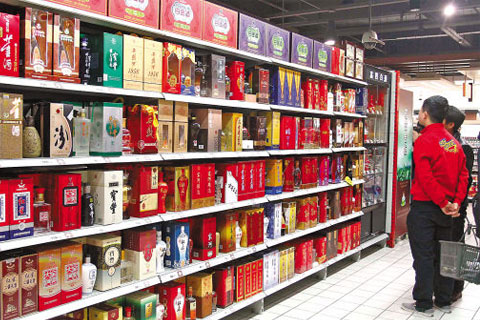 (Beijing) — China's luxury-alcohol makers are seeing business rebound after a sales decline of over three years that began with the central government's crackdown on extravagance and corruption. But analysts warn the good times may not continue as the economy stalls.

Major high-end distillers, including Kweichow Moutai Co. and Wuliangye Yibin Co., have released strong first-half results. Moutai said its sales revenue rose 15 percent to 18.2 billion yuan (US$ 2.72 billion) in the first six months, with net profit rising 12 percent to 4.9 billion yuan. The company had 11.5 billion yuan in advance receivables from distributors by the end of June 30, a record high.

Wuliangye reported 18 percent growth in both first-half sales and net profit. Since March, Wuliangye has increased prices for some products following several price cuts in the past two years — a shift that shows recovering demand.

shifted from luxury official banquets and gifts to the general public, which would lead to more sustainable and stable growth. But Li added that luxury liquor may face more pressure as the economic slowdown continues.

Most high-end liquor makers have seen business reshuffling and capacity cuts since late 2012 as they sought to adapt to the cooling market. In 2015, Moutai reported only 3 percent growth in sales from the previous year, compared with 44 percent growth in 2012. Wuliangye also saw 2015 sales grow at 3 percent, down from 34 percent in 2012.

While high-end liquor revenues revive, sales of cheaper brands have remained sluggish. Luzhou Laojiao Co., which produces a wide range of liquor products, said sales of its luxury brands increased 195 percent year-on-year in the first half, while sales of its cheapest products declined 36 percent from a year earlier.

Other lower-end distillers such as Anhui Golden Seed Winery Co. and Jiugui Liquor Co. have also registered sales and profit declines in the first six months.

Huaan Securities said in a recent report that as luxury liquor makers diversify their products by offering cheaper options and as consumers are increasingly able to afford pricier liquor, the competition in the low-end liquor market will heat up further.