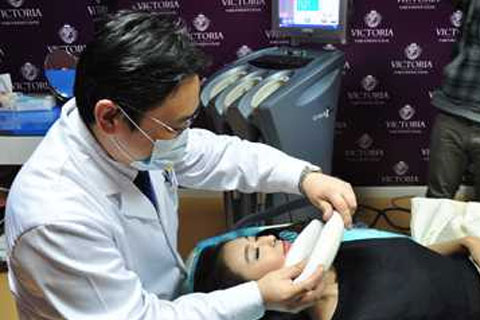 Since last year, venture capitalists and Internet giants have poured billions of yuan into mobile apps that offer heavy discounts and even huge loans to those who want to go under the knife in a bid to improve their looks.

Such treatments occupy a gray area between real health care and consumer health care that has grown rapidly but is barely regulated in China. Several investors interviewed by Caixin said that compared to the healthcare sector, the cosmetic-surgery industry "faced fewer policy bottlenecks" in terms of surgery standards, drug prescription rules and medical insurance requirements, paving the way for faster growth and making it more predictable for investors.

But the widespread practices of paying for reviews and offering easy access to loans of up to hundreds of thousands of yuan have raised concerns about the business practices of these fledgling nip-tuck apps and the lack of regulations to rein in the booming cosmetic-surgery industry.

Since 2014, apps and websites that make it easier for customers to connect with plastic surgeons have mushroomed in the country. A college freshman who uses the nickname "Xiao Bai" had used two popular apps — SoYoung and Gengmei, or "more beautiful" in Chinese — and said they looked like a mishmash of Facebook and Yelp, with features to rate clinics and treatments and make friends with those who have already undergone surgery.

"I was surprised at how closely the apps resembled a social network, or perhaps a self-improvement blog," the 20-year-old said. Carefully snapped "before and after" selfies from cosmetic surgery enthusiasts — mostly women in their teens and 20s — filled the home page of Gengmei, along with short journal entries detailing patients' experiences with treatments. The comments sections were filled with gushing praise — "So pretty!" "How cute!" "You've really recovered quickly!"

Other startups vying for a piece of the beauty pie have raked in millions of yuan from investors, including Suning Universal Co. Ltd., Shanghai Fosun Pharma Group Co. Ltd., and Alibaba Group Holding Ltd.

The Chinese Association of Plastics and Aesthetics, a nonprofit industry association, said that demand for cosmetic surgery in China is expected to more than double to 800 billion yuan by 2019 from the amount spent in 2014, making the country the world's third-largest plastic-surgery market after the United States and Brazil.

Growing incomes, especially among women, plus peer pressure and the "tremendous influence" of South Korean pop culture have fueled the demand for "better looks", wrote Wang Yumeng, a healthcare analyst for HSBC Global Research, in a February report.

SoYoung in May said nearly 60,000 non-invasive treatments were booked each month through its app. The company running Gengmei said the app had attracted over 15 million registered users since it was released in 2013, and it offers services from over 6,000 clinics.

Clinics were lining up to advertise their services on these apps because they are a cheaper way to find clients. Before, it cost clinics an average of 6,000 yuan to attract a client via advertising services provided by search engine Baidu, but mobile apps have cut this to a few hundred yuan, said Liu Di, founder and chief executive of Gengmei.

But a Caixin intern found that many of the clinics listed on these apps do not provide any evidence of a government license or accreditation, and some clinics paid users for reviews.

"Users earn 'beauty points,' which can be traded in for discounts, by sharing their personal experiences or leaving comments on others' posts," Xiao Bai said. Customers can also earn discounts by sharing promotional material from Gengmei on the widely used social networking app WeChat. "On some apps, it literally pays to participate," she said.

"Through Soyoung Wallet, a college student like me can easily receive thousands of yuan in loans to go under the knife," Xiao Bai said.

A quick glance at Soyoung's "Wallet" feature shows it allows users to borrow up to 6,000 yuan at 1.2 percent interest or take out large loans of up to 200,000 yuan at an interest rate of 1 percent, but the timeline for repayment was not immediately clear. The app claims that 70 to 80 percent of all loan applications are approved, and one needs only to provide rudimentary personal information such as employment and educational backgrounds and upload a salary stub to take out the loan.

"The ease with which a young person like me with no credit history and little understanding of debt could borrow money worries me," Xiao Bai said.

Many rely on building "a community" where users rate clinics and doctors and share their treatment experiences as a way to bridge the trust gap that exists in the industry.

In China, plastic surgeons must have a government license, but only an associate's degree is required, according to the Asian Plastic Surgery Guide.

Accreditation requirements for clinics are vague. There are about 4,000 plastic surgery clinics in the country, including 500 operated by public hospitals and 500 larger, private clinical chains, the China International Capital Corp. (CICC) said. There were another 3,000 small- and medium-sized private clinics, and there have been frequent customer complaints to the official consumer welfare watchdog against the smaller players, citing botched operations and questionable deals, the investment bank said.

Recently, prosecutors in the eastern city of Nanjing said they have slapped criminal charges on 23 suspects for running unlicensed plastic surgery clinics in the city.

Many users now rely on "friend's recommendations" when selecting a clinic, an analyst said, and mobile apps try to tap this trend.

"By creating an online community for patients to share their experiences and rate clinics, beauty service apps are becoming trustworthy sources of information that helps consumers make better choices," said Liu Xiao, vice president of SoYoung. But he did not comment on the practice of offering redeemable "beauty points" for diary entries, comments and spreading the word about deals among friends, a widespread practice among apps that many see as comparable to paying for testimonials and reviews.

Cosmetic surgery apps get a commission from clinics for allowing users to consult with a surgeon online, make appointments or book a surgery and use steep discounts to attract clients.

"Plastic surgery apps are mainly luring users through heavily discounted deals," said Ma Dongsheng, deputy general manager of Evercare (Beijing) Holding Group Co., a leading cosmetic clinics chain. This practice creates a problem for clinics because customers who book through mobile apps are more price-sensitive and it is difficult to transform them into long-term clients who may opt for other procedures, he said. Large plastic surgery hospitals were reluctant to partner with apps for this reason, he added.

Users say some apps cut treatment prices by nearly two-thirds. "When I prepared to book a double-eyelid surgery at a clinic in downtown Beijing, I had to pay a 399-yuan deposit for a procedure that would cost about 2,000 yuan after the discount offered by the app. But when I visited the same clinic in person, the attending doctor said the actual surgery price started at 6,800 yuan," Xiao Bai said.

Data on how these discount deals for treatments are affecting consumer choices, especially whether they may lead to a form of surgery addiction, is not available, because many of the startups are only 2 to 3 years old.

Shot in the Arm

But Gengmei founder Liu said apps are moving away from commissions and diversifying their revenue streams into advertising and selling drugs and supplements needed for post-surgery care and even connecting clinics with material and equipment suppliers. Apps also want to make money by offering loans to clients, he said.

According to Liu, the most lucrative part of the plastic surgery industry is selling drugs and materials, where markups were high.

Industry information provider Cnii.com.cn says about 820,000 Botox injections were sold in China last year at prices ranging from 4,000 yuan to 7,000 yuan. But about half of the injections were fake products or smuggled into the country, so their supply source was unknown, the website said.

But difficulties in getting drug selling licenses and the high cost of developing storage and transportation facilities for drugs such as Botox have delayed these plans, Evercare's Ma said.

Cosmetic surgery apps are also eyeing plans to expand into running offline clinics. In June, SoYoung opened its first brick-and-mortar clinic in Beijing to offer minor treatments. In August, Gengmei announced a plan to build hospitals and train 100 surgeons. The two companies said they may turn a profit by the end of this year after bleeding cash for three years.

A cosmetic surgery industry investor, however, said he was switching his investment focus from brick-and-mortar clinics to mobile platforms because the latter had a lower investment threshold and potential for faster growth.