By Liang Ruiyao and Chen Na 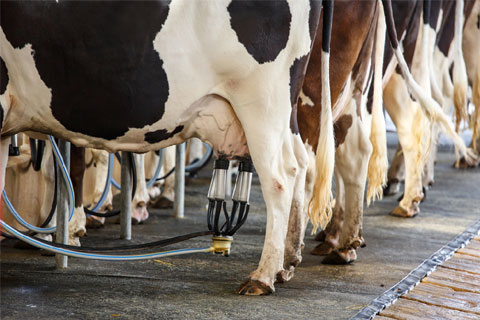 The country's largest milk producer by output, China Modern Dairy Holdings Ltd., lost 566 million yuan ($84.7 million) in the first half, sustaining the first-ever loss since it went public on the Hong Kong stock exchange in 2010. Sales were down 8 percent from the same period last year, the company said.

During the first half of this year, "a large number of small-scale farms exited the market, while excess supply of raw milk was seen in some large-scale farms, with a declining trend in profitability," China Modern Dairy said in its earnings report.

YuanShengTai Dairy Farm Ltd., another Hong Kong-listed company, lost 136 million yuan in the first six months. Shenzhen-listed Xinjiang Western Animal Husbandry Co. Ltd. reported a loss of 26.7 million yuan, its first time in the red in the past six years, according to the company's financial reports.

The price of raw milk started to decline in mid-2014 after two years of rapid growth and stood at 3.4 yuan per liter as of the end of July, according to Sinolink Securities. Some dairy farmers in Shandong and Shaanxi provinces had resorted to dumping milk and even killing dairy cows after prices started to dip, a commentary published by state-owned China Daily said in mid-2015.

Intense competition from imported milk powder has exacerbated the drop in demand for raw milk, said Song Liang, an industry analyst. Dairy product manufacturers preferred to use milk powder, which has a longer shelf life than liquid milk, and a drop in global milk powder prices has also made imports cheaper. As of the end of May, global export prices of both skimmed milk powder and whole milk powder have dropped 22.7 percent and 28.6 percent respectively from late last year, although there were signs that the prices may pick up in coming months, according to data from the United States Department of Agriculture.

Infant formula makers also preferred to source from overseas suppliers after the melamine scandal that rattled the country in 2008.

Song predicted that heavyweights in the industry will survive, although domestic raw milk suppliers have seen their balance sheets squeezed and many mid- and small-sized companies have gone bankrupt.

Two companies – China Huishan Dairy Holdings Co. Ltd. and China Shengmu Organic Milk Ltd. – beat the odds by making a profit in the first six months by cutting out middlemen and selling pasteurized milk under their own brands in convenience stores. The companies also targeted smaller cities where foreign products were not widely available.