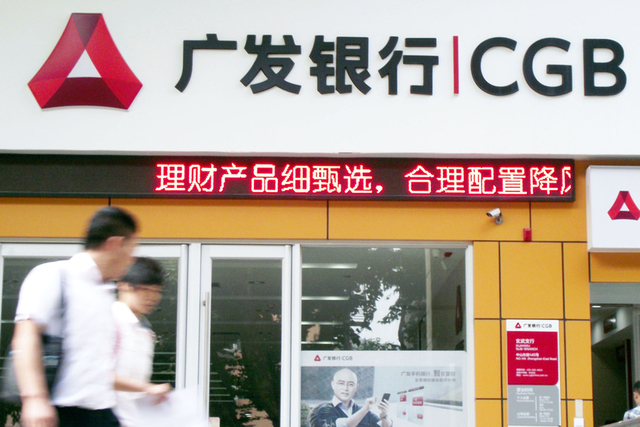 (Beijing) - A golden era that saw foreign banks flock to China in pursuit of riches came to a symbolic end earlier this year, when global giant Citigroup officially dumped its longtime holding in China Guangfa Bank Co., one of China's oldest commercial lenders in the southern city of Guangzhou.

Few details were given at the time, as the two sides announced a divorce that saw Citi end a decadelong partnership with the sale of its 20 percent Guangfa stake to China Life Insurance. But new insider details show the constant discord inside the bank, reflecting conflicts that often exist between commercially minded Western businesses and their more politically focused Chinese partners.

At the center of the conflict were the lender's two top executives, who often butted heads and ultimately resigned. One was Chairman Dong Jianyue, who also served as Guangfa's party secretary — a top role at all state-owned Chinese firms who often commands equal or even more power than the chief executive. The other was Guangfa President Morris Li, a former senior executive for Citi in Taiwan before joining the Chinese bank in 2010.

Neither could dominate daily decision-making, leading to a constant state of gridlock that hobbled the bank and prevented it from realizing its potential. In his farewell letter before leaving, Dong blamed the bank's lackluster performance on "cultural differences" that were never resolved.

Formerly known as Guangdong Development Bank Co., Guangfa was founded in 1988 and made most of its loans during its first decade in its home province of Guangdong. Like many Chinese lenders during that time, it quickly racked up piles of bad loans from its customers, many of them infrastructures builders, and reported a loss of 691 million yuan ($103.4 million) in 2005.

The decade after that was considered a golden era for Chinese banks, as many reformed their ownership and were allowed to clear their books of bad loans and seek new investors beyond their traditional government stakeholders. Many foreign banks bought stakes in their Chinese peers during that period, with names like HSBC, Bank of America and Goldman Sachs all making multibillion-dollar investments in their Chinese peers during that period.

Guangfa was among that group when it sought to woo foreign shareholders in 2006, with the aim of becoming more commercial and profitable. Citigroup ultimate won a heated bidding war, beating Société Générale SA and Ping An Insurance for the right to purchase 84 percent of Guangfa for just over $3 billion in December that year.

Citi later had to settle for just 20 percent due to Beijing's restrictions on foreign ownership of Chinese banks. China Life, the nation's largest insurer, also became a major stakeholder, purchasing 20 percent of Guangfa at that time.

The partners were traveling in uncharted waters, and ultimately the bank's own Li Ruohong become Guangfa's chairman and party secretary. Meantime, Citi's own Michael Zink, a former senior executive at the bank's South Korean subsidiary, took on the role of president, responsible for Guangfa's daily management.

Zink became an instant media sensation by bringing in an 11-member executive team, taking up six of the 16 seats in Guangfa's board — an unprecedented move at that time. But the fanfare quickly faded, as Citi tried unsuccessfully to transplant its retail-banking-focused business model into Guangfa, amid talk of frequent bickering between the U.S. and Chinse partners.

"After Citi was brought on board, Li Ruohong was not compatible with them, and he tried to meddle in the administrative affairs using his authority as party secretary, something the Citi team felt was very unacceptable," said a senior executive at another commercial bank in China, who was familiar with the matter and spoke on condition of anonymity.

The conflicts only grew when a five-year plan proposed by Zink was resisted by Guangfa's Chinese shareholders, and mediation by the Guangdong provincial government failed to resolve the matter. The constant clashes began to affect the bank's ability to perform its daily business.

Three fractions ultimately emerged, one led by Citi, another by China Life, and the third centered on original Guangfa executives, a midlevel bank executive told Caixin, also on condition of anonymity. The different groups often clashed and thwarted each other's plans, which changed nearly every year.

Li Ruohong finally left in 2009 for "serious violations of party discipline", a term that government watchdogs usually use as a euphemism for corruption. Zink resigned as well a year later, leaving behind a rudderless bank fraught with infighting.

Li's position as chairman and party secretary was soon taken over by Dong Jianyue, who boasted a decade of experience as a senior executive with Bank of China, one of the country's big four national lenders. Citi installed Morris Li around the same time, hoping to launch a new era of better relations.

But new strife followed over the next six years, even though Dong and Li repeatedly dismissed reports of discord behind the scenes. During the pair's brief co-tenure, Guangfa's plan for a dual-listing in China and Hong Kong ultimately collapsed in 2011, and a similar plan for a domestic listing also failed two years later.

To this day, Guangfa has yet to list, even as many of China's other regional commercial lenders have made IPOs both on the mainland and in Hong Kong.

"Some work has not reached my expectation. There are some oversights, as well as some projects that are still under progress, particularly the IPO," Dong said in his farewell letter at the time of his resignation. "We've kept making great efforts and used up our energy to push it forward, but it still has not succeeded," he said, blaming cultural differences and his own limited abilities for the failure.

Guangfa's performance has continued to be lackluster under its latest management. It had total assets of 1.84 trillion yuan at the end of 2015, larger than most of the city commercial banks in China. But its net profit of 9.06 billion yuan was down 24 percent from the previous year.

Following Dong's departure and Citi's stake sale, China Life is now Guangfa's largest shareholder with 43.7 percent of the company, and will be the one to chart its future. The nation's largest insurer has already named its vice president Liu Jiade as Guangfa's vice chairman and interim chairman. Another China Life executive, Zhang Fengming, will be the bank's acting president, as the life insurer tries to succeed where Guangfa and the original Citi management failed.