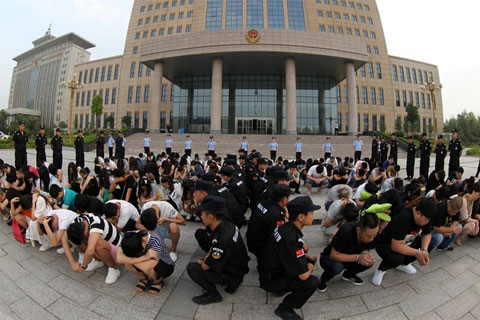 Police make arrest of over 100 suspects linked to phone scams in Xuchang in Henan Province on June 28. Photo: Visual China

(Beijing) — The recent deaths of two students from the same city in Shandong province who fell victim to phone scammers have led to a public outcry over the failure to enforce privacy laws and the lack of oversight of certain telecom services that have allowed con artists to operate.

Xu Yuyu, an impoverished schoolgirl, died of heart failure on Aug. 19, two days after she lost an entire semester's worth of college tuition to a scammer who had pretended to be a local education official. Fraudsters told her to transfer money so that she could access her financial aid. Four days later, another college student from Xu's hometown of Linyi died after falling prey to another con artist who pretended to be a police officer and demanded that the boy repay a bank loan that he had never taken, local media reported.