By Chen Baocheng and Li Rongde 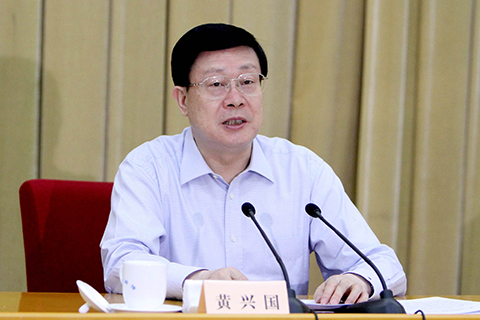 (Beijing) - The mayor of Tianjin, one of the four largest cities in China, is being investigated for corruption, according to the Central Commission for Discipline Inspection (CCDI), the ruling Communist Party's top anti-graft agency.

Huang Xingguo, 61, the mayor and interim party secretary of the city's party committee, is being investigated for "serious violations of party discipline," a euphemism for corruption, the CCDI said in a tersely worded statement released late Saturday night.

However the CCDI provided no details about the nature and extent of his alleged irregularities or where he is being held.

Huang is the tenth person in the 205-member Central Committee of the Communist Party to have fallen from grace since party general secretary Xi Jinping began a sweeping anti-graft campaign in November 2012 amid rising discontent over rampant official corruption.

Huang was last seen in public on September 9, when he went to a local school in the city's Hexi District to attend a function in the morning marking this year's Teacher's Day, according to a September 10 report in Tianjin Daily, a party-run newspaper. He held a meeting with a visiting delegation of the Nationalist Party in Taiwan in the afternoon, according to the publication.

It is not clear what prevented him from being officially promoted to the top job in the port city. The key position is usually held by a member of the powerful Politburo of the party's Central Committee, the party's top decision-making body. That's the case with Beijing, Shanghai and Chongqing party secretaries.

During his tenure in Tianjin, the city and its reputation were badly scarred by a deadly warehouse blast on August 12, 2015 that left 165 people dead and another eight still unaccounted for.

Among other controversies, a warehouse with huge stocks of hazardous chemicals was allowed to be built within one kilometer of at least three high-rise apartment buildings and a subway station--all in violation of government safety rules, investigators found.

Scores of government officials overseeing work safety and port facilities as well as company executives were detained in the aftermath of the disaster.

While Huang earlier acknowledged that he needed to take responsibility for the incident, he side-stepped a question during a news conference last year about whether he would take the blame by resigning.

Huang, a native of Xiangshan in eastern province of Zhejiang, spent much of his career in the eastern region rising through the ranks before he was promoted as the party secretary of Ningbo in 1998. He was transferred to Tianjin to serve as the deputy party secretary of the city in a promotion five years later.

He was further promoted as the mayor in January 2008 and stayed on as the mayor of Tianjin as well as the interim party secretary in the city in December 2014.