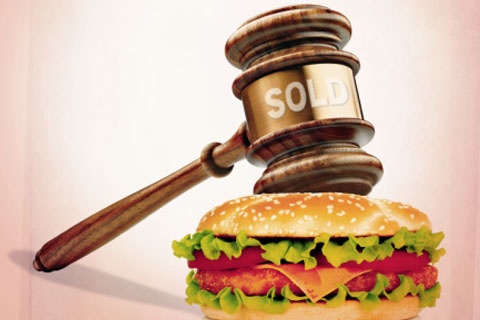 (Beijing) — Thirty years after entering China, U.S. fast-food giants Yum Brands and McDonald's are changing their recipes for business operations in the country, with each using the same recipe — offloading their respective China operations.

In early September, Yum, which owns the KFC, Pizza Hut and Taco Bell chains, announced a sale of a slice of its China operations to private equity fund Primavera Capital Group and Ant Financial Services Group, which is affiliated with Alibaba Group. The move is a step in the company's plan to spin off its China operation and list it on the New York Stock Exchange separately.

The companies are "taking the chance to cash out during the market downturn and reduce risks in the regional business," said the investor, adding that both companies showed a clear intention to "improve (their) market value" in the short term.

Since KFC opened its first China outlet near Tiananmen Square in 1987, and McDonald's entered Shenzhen three years later, the smiling Colonel Sanders of KFC and the golden arches of McDonald's have battled side by side in China to become ubiquitous icons of Western tastes.

Yum now operates about 5,000 KFCs and 3,000 Pizza Huts in China, which contribute over a half of the company's global revenue and profit, whereas McDonald's runs 2,200 Chinese outlets, accounting for about 5 percent of its revenue worldwide.

But both Yum and McDonald's have seen their luster dim as China's fast-food industry has grown from nothing to a multibillion-dollar market. Chinese diners, who once saw KFC's fried chicken and McDonald's burgers as a special treat, are now turning to more-diverse options as their incomes grow.

A series of food-safety scandals between 2012 and 2014, in which local suppliers of KFC and McDonald's were found using substandard food products, resulted in many consumers shying away from the brands.

The plan to spin off Yum's China operations was pushed forward in May 2015 by two activist investors — Dan Loeb, founder of hedge fund Third Point LLC, and Keith Meister of Corvex Management LP — after the company reported a 6 percent decline in China sales in the first quarter. Operating profit in China decreased 31 percent, according to the company's financial report.

In October, Yum officially announced the spinoff plan to be completed by the end of 2016. Chief Executive Greg Creed said in a statement that the separation of the China business will bring up to $6.2 billion in capital returns to shareholders.

But Yum China's spinoff and asset sale may lead to a payment of as much as $5 billion in capital gains taxes and other taxes. Yum had hoped the acquirer would shoulder all the payments in any buyout deal, but that turned off most bidders, according to an investor who participated in the bidding.

According to the final sales plan, Primavera Capital, founded by former Goldman Sachs Greater China Chairman Fred Hu, invested $410 million while Ant Financial invested $50 million for Yum China shares. They will get an 8 percent discount to the average share price of Yum China traded between 31 days and 60 days after it is listed. It will also grant the two investors a combined 4.3 percent to 5.4 percent stake in Yum China, based on its current valuation of $8.5 billion to $10.5 billion. Primavera Capital and Ant Financial will also have warrants to increase their ownership to nearly 10 percent in five years.

Rather than a takeover, the deal "is more of getting cornerstone investors from China to take part in Yum's business spinoff plan," said a source close to the deal who asked not to be named.

But a source close to Ant Financials' management said that with merely a 0.5 percent stake in Yum China, the deal "is just a financial investment."

While Yum is working on the spinoff plan, McDonald's is also seeking to revamp its China business in an alternate way. The U.S. burger chain announced in March the auction of 20-year franchise rights in China, involving 1,500 restaurants, as well as new outlets to open. The franchise-right sales will not affect McDonald's existing franchise restaurants. The deal will not include any asset sales, McDonald's said in response to Caixin's request.

An executive whose company participated in the bidding said that because McDonald's prefers bidders with related business backgrounds, it did not have a plan to list the China operations with a way for investors to exit, so most private equity investors have dropped out.

One source close to the deal said CITIC has been determined to win the deal and has started finding professionals to form the management team. One of them is Sam Su, the long-term head of Yum China operations who quit in August 2015.

McDonald's has not yet revealed its price tag, but media have reported that the 20-year franchise right is likely to be valued at $2 billion to $3 billion. Several sources close to the bidding told Caixin that most suitors consider $1 billion to $2 billion to be a more acceptable price range for a deal.

The restructuring in China is part of McDonald's worldwide strategy to remake itself into an asset-light, franchise-focused model to revive growth following a continuous business slide since 2013. Last year, McDonald's Chief Executive Steve Easterbrook revealed a long-term goal to franchise 95 percent of its stores worldwide, up from the then-current 80 percent. By the end of 2015, only 30 percent of McDonald's stores in China were franchised, including those operated by its two 50-50 joint ventures in Beijing and Guangdong with Sanyuan Foods, a subsidiary of Beijing Capital Agribusiness Group.

An executive at a Shanghai-based restaurant chain said that unlike KFC, which has been operated by an independent team in China from the beginning, McDonald's China operations have been directly controlled from corporate headquarters in Chicago.

McDonald's material supply, equipment procurement and menu development in China must follow unified standards applied globally for McDonald's restaurants, which "ensures the quality," said an investor close to the company.

"McDonald's has been losing money in every newly opened shop in China," said the restaurant chain executive.

But Easterbrook is expecting the franchise sale to unlock the potential of growth. "This will allow McDonald's to accelerate our growth and scale faster across diverse markets," he said in March. "Asia represents a significant area of opportunity."