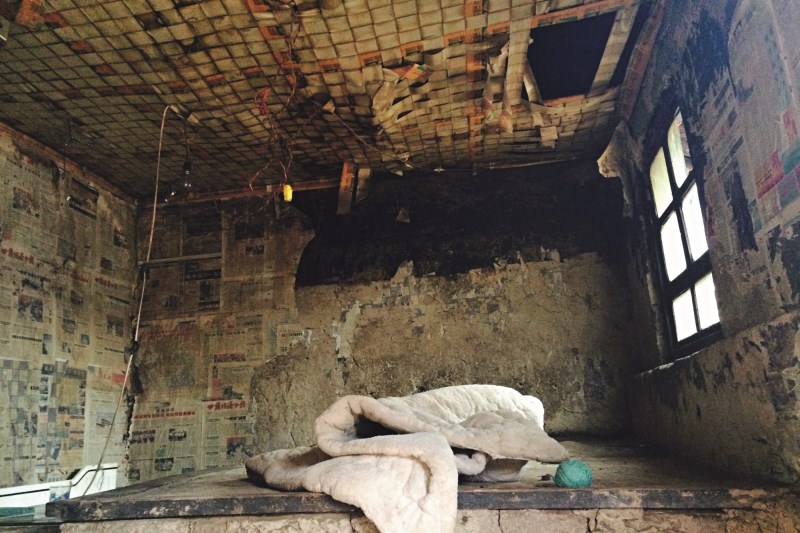 The dilapidated small room with a clay bed Yang Gailan and her children used to sleep on. Photo: Xiao Hui / Caixin

(Gansu province) — The deaths of four children at the hands of their poverty-stricken mother who then committed suicide has sparked outrage and an online debate about how corruption and red tape have undermined China's poverty-alleviation efforts.

The incident has led many to ask why the billions of yuan that has poured into China's anti-poverty program had failed to reach the neediest. The family, among the poorest in their village, had received no government aid since 2014.

The situation "exactly reflects the painful reality of the extent of China's poverty," wrote Xiang Songzuo, chief economist of the Agricultural Bank of China, on his verified microblog. "On one side, there are corrupt officials embezzling hundreds of millions at every turn and the rich spending thousands every day, … while on the other side there are those in extreme poverty who lose all hope in life."

Yang Gailan, 28, used a hammer to bludgeon her 6-, 5- and 3-year-old daughters and her 5-year-old son before drinking pesticide on Aug. 24, police in the northwestern province of Gansu said. Three children died instantly, while the fourth died at a hospital with the mother. Yang's husband, Li Keying, took his own life a week after the children were buried.

Yang was from Agushan village in Kangle county. There were anti-poverty slogans written in bright red on the walls along the dirt road leading to her small, dilapidated adobe house.

The house, in which she lived with her father and grandmother, was built in 1952 and had never been renovated, some villagers said. The windows lacked glass panes, and the walls were worn out. A chest-high wardrobe, an old TV set and several small wooden stools were all the furniture the family had. Part of the roof of the room in which Yang had slept had caved in, and parts of the walls had crumbled.

But the family had been removed from a list of those eligible for a government low-income allowance in 2014 by the village committee because their annual income per person put them above the poverty-line benchmark of 2,300 yuan ($345) a year, said Li Jinjun, the former village party secretary.

Yang's grandmother and other villagers said many poor families had been shut out from the relief program because local officials had used flawed methods to estimate their income. Others said they had to bribe authorities to get on the aid list.

Days before the incident, Yang had told her family that the people who denied them access to cash support and other poverty relief subsidies "were forcing her to do something (extreme)."

Several neighbors told Caixin that Yang's family has been struggling financially for years.

Earlier, the family had received 2,800 to 3,900 yuan in state income support for poor families, which they had used to buy seeds, fertilizer and groceries.

But in 2014, the village committee stopped the cash payments and said the family was not eligible for other subsidies for renovating the house or to start a business because their income was above the eligiblity level. But Yang's grandmother and other villagers said the local officials' estimates were flawed.

Last year, the village committee estimated that Yang's husband had earned 21,000 yuan by working 200 days at a construction site.

But a villager who worked at the same site said the two had actually found work for only 60 days, and Yang's husband had earned only 7,000 yuan, only a third of the government estimate.

Yang Lanfang, Yang Gailan's grandmother, told Caixin the family made about 2,000 yuan a year from selling produce from their 3-acre plot, but village officials have estimated that they earned about 7,000 yuan each year from the land.

On Sept. 16, the Kangle county government said it had sacked or demoted six officials, including the county's deputy governor and the Agushan village party secretary, saying officials had "merely used their own assumptions" and not the facts when calculating villagers' incomes, and this had shut out many families from the government assistance program.

A team of investigators from a poverty-alleviation unit under the State Council, China's cabinet, was sent to the village two days after the deaths to look into alleged abuses of public funds earmarked for poverty relief, said Su Guoxia, a spokesperson for the State Council's Leading Group.

Relatively well-off families, particularly those related to the village administration, were allowed access to state funds, a list of beneficiaries seen by Caixin shows.

For example, a family that owned two vehicles and a sand-supplying business was included in the list.

Another villager, who asked not to be named, said he had paid village and township officials 2,000 yuan to be included in the list of those eligible for state benefits for the poor.

Over 55 million people, or about 4 percent of the country's population, live on less than $2 a day, official figures show.

The central government wants to eradicate poverty by 2020. But its ambitious poverty relief program has failed to improve the lives of those living in the poorest regions such as Agushan village because there is a mismatch between the support these programs offer and the real needs of the people, according to academics.

Local villagers in Agushan agree. For example, poor families are entitled to a housing subsidy of 12,000 yuan, which they can use to build new homes or renovate old ones, said Li, Agushan's ousted party secretary. But farmer Qi Zhiqing said his family had no means to raise the other 58,000 yuan needed to build a new home — a problem facing many others — and therefore, the government money for housing support was left untouched.

The relief program also includes a 10,000-yuan subsidy to purchase cattle and a 40,000-yuan interest-free bank loan to start a business. Qi said he had taken this loan and started growing herbal plants, including the popular goji berries, but the family ended up losing money because there was no support to find buyers for their produce.

The Agushan incident has highlighted the two main problems with the government's anti-poverty drive, analysts said. Those who are eligible such as Yang's family are left behind due to corruption and official incompetence at the village level, while livelihood support programs fail because they do not provide enough technical and business training to poor families, they said.

Authorities must also broaden the scope of poverty alleviation programs to include access to better education and affordable healthcare, said professor Zhang Zhaoxin from the Rural Economy Research Center under the Ministry of Agriculture.

"Many rural families fall into poverty because they spend too much on medical bills or schooling for their children," Zhang said.