Scientists Concerned About Plans to Make Telescope a Tourist Attraction

By Zhou Chen and Wu Gang 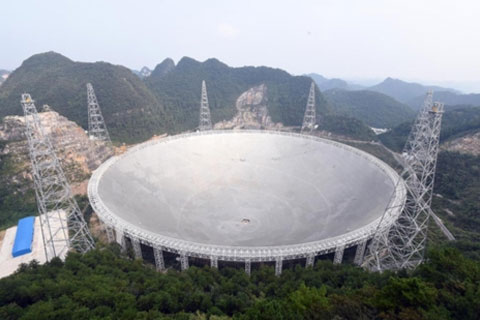 The Aperture Spherical Telescope (FAST) — a huge structure with a surface area the size of 30 soccer fields — was built in Pingtang, a remote county in the southwestern province of Guizhou province. It began tests on Sunday.

The giant telescope, 500 meters across, is part of China's ambitions to become a science powerhouse. Once fully operational, it will be able to pick up radio waves emitted by objects in space, explore the evolution of galaxies and the universe, and even listen to whispers from extraterrestrial civilizations, if any, said Zheng Xiaonian, deputy head of the National Astronomical Observatories, which is in charge of the project.

The 1.2 billion yuan ($180 million) telescope can also be used to monitor pulsars, which are related to the research in gravitational waves that can help test Albert Einstein's General Theory of Relativity.

But the Pingtang government's decision to open the site to the public on Monday has scientists worried as this may obstruct research.

"Since FAST is highly sensitive to the weakest signals from the depths of space, a cellphone being turned on near the site is like shining a flashlight on a human eye that was staring at the stars in the dead of night. You'll be instantly blinded," said Zhang Shuxin, deputy manager of the FAST project.

Although authorities have banned all radio-wave emitters, including cellphones, TV sets, microwave ovens and automobiles, within 5 km of the telescope, "tourists may feel an impulse to take photos to share on social media," he said.

If the telescope stops working for a day, the loss would amount to about 400,000 yuan, given the instrument has a 30-year lifespan, said Zhang.

FAST is considered the world's most sensitive radio telescope, and it can be used for "Nobel Prize-winning research," said Wu Xiangping, a research fellow at the National Astronomical Observatories. "Scientists don't really want too many tourists to visit the site," Wu told Caixin in an interview in August.

But banners shouting slogan such as "Take advantage of the big radio telescope, ignite big tourism!" — put up by the local government — can be seen everywhere on the road leading from the county center to the site of the mountain on which the telescope is built.

The county government's website says it has built a 740-acre theme park bordering the 5-km-radius area reserved for the FAST project. The park includes a space-themed hotel, a tourist information center and a space museum. From a sight-seeing platform nearby, visitors can peek into the gigantic dish from above. But tourists will not be allowed to bring any electronic devices onto this platform, local newspaper Guiyang Evening News reported on Sunday.

The theme park will charge each visitor 368 yuan during the initial testing period, and nearly double the price to 668 yuan when the telescope is fully operational, the newspaper said.

Zhang said he is not opposed to the local government's plans to promote tourism to boost the local economy, but he said he hopes local authorities will strictly enforce the cellphone ban and other restrictions on visitors and better educate the tourists.