By Yuan Suwen and Coco Feng 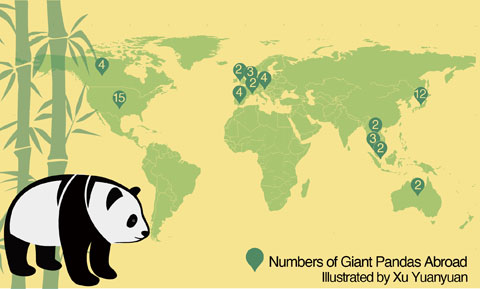 (Beijing) — It's official: The giant panda is no longer an endangered species.

After decades of hard work by the Chinese government and conservationists, the population of this iconic animal has rebounded to a level that the International Union for Conservation of Nature and Natural Resources (IUCN) considers large enough not to warrant the "endangered" label.

The panda's status has been changed to "vulnerable," the rating with the fifth-highest level of concern of the IUCN's seven Red List categories. "Vulnerable" is one notch below No. 4 "endangered."

But the change by no means signifies the future of this much-loved creature is safe. The number of pandas bred in captivity and admired by millions of visitors a year in zoos around the world has doubled over the past decade or so. But over the same period, the number estimated to be living in the wild, mostly in the remote mountainous areas of Sichuan province, has risen by just 17 percent and is still well below levels seen in the 1970s.

"Whilst this latest news (from the IUCN) is proof that our approach is working, it is important to remember that the giant panda is not out of the woods," said Iain Valentine, director of the Giant Panda Project at the Edinburgh Zoo and the man behind the 2011 agreement to bring two of the creatures from China to the Scottish capital.

China's State Forestry Administration, whose responsibilities includes wildlife conservation, said that the change in status validates the effectiveness of the government's work to protect the panda. But the agency highlighted several key threats to wild pandas, including the deterioration in their natural habitats, such as the destruction of bamboo forests from encroaching urbanization, construction work and climate change.

These are not new problems. A national giant panda census in the late 1980s found that the panda population living in the wild had shrunk by 55 percent in a decade due to the deteriorating natural environment. Although the latest census shows the numbers have recovered significantly, they are still well below the levels of the 1970s.

Dubbed a "national treasure," the giant panda is a tremendous source of pride in China and has become an important diplomatic tool for the state to project its soft power abroad and help foster relations with other countries.

The Chinese government gave two giant pandas as gifts to the United States after then-U.S. President Richard Nixon made his historic visit to China in February 1972, marking the first step in the normalization of relations between the two countries.

From 1957 to 1982, 23 giant pandas were presented to nine foreign countries, according to Oriental Outlook Weekly, a magazine owned by the official Xinhua News Agency. But in 1982, China announced it would no longer give giant pandas as gifts, and instead started offering them only on multiyear loans. The government also set up the China Conservation and Research Center for the Giant Panda, based in the southwestern province of Sichuan, to undertake research, conservation and international cooperation.

There are now more than 55 pandas on loan to 12 foreign countries.

But panda diplomacy doesn't come without strings attached. China charges an annual fee to the temporary owners of these cuddly creatures, although it doesn't disclose figures.

Edinburgh Zoo, which received a pair of breeding pandas in 2011, pays China 600,000 pounds ($779,000) a year for the animals, according to a report in the British newspaper The Guardian. On top of that, the zoo spent nearly 300,000 pounds to house the pandas and pays around 100,000 pounds a year to import fresh bamboo from France.

Even so, the surge in visitors justified the outlay, at least initially. Data from the Royal Zoological Society of Scotland, which runs the zoo, show that in 2012, visitor numbers rose by 51 percent, and the society saw its profits jump 53 percent.

China is coy about the payments it receives for the loan of its pandas. The forestry administration administers the funds, and there are no public records of how much is raised, or where and how the money is spent.

Zhang Hemin, director of the panda research center, insists the animals aren't being rented out. "We don't like to refer to this as a 'rental fee'; it's more like a cooperation fee," or a donation, to support China's panda research program, he told Southern Weekly, a Chinese magazine. "The income is used for research purposes."

The magazine said that 60 percent of the fees are used for conservation work relating to pandas living in the wild, with the rest spent on those kept in captivity.

According to the Sichuan department of the State Forestry Administration, a total 9.3 billion yuan ($1.4 billion) was spent on preserving forests and converting farmland into forestry from 2002 to 2012.

The devastating earthquake in the province in 2008, which left more than 69,000 people dead, destroyed about a fourth of the wild pandas' natural habitat and affected more than 60 percent of the population, according to Xu Weihua from the Chinese Academy of Sciences. The world's largest giant panda breeding center, the Wolong nature reserve, was destroyed, and 1 billion yuan was spent on building a new base nearby. The Hong Kong government also donated 1.3 billion yuan to fund projects at the center.

But in spite of the publicity, the panda diplomacy, the conservation, the research and the income generated from panda lending, China's "national treasure" is still under threat even if it is no longer classed as an endangered species.

Mating and reproduction are key challenges for scientists. Female giant pandas are fertile only once a year for two or three days, and even if a panda becomes pregnant, the cub has a high chance of dying shortly after birth.

The first pair of giant pandas sent to the U.S. after Nixon's visit, Ling-Ling and Hsing-Hsing, lived at the National Zoo in Washington, D.C., for 20 years. Although Ling-Ling produced five cubs, none survived longer than a few days.

Pan Wenshi, a renowned panda biologist and professor at the School of Life Sciences of Peking University, noted in his book A Chance for Lasting Survival that mating per se was not a problem, but rather, the way panda mating was organized. Based on his team's lengthy observations in China's largest panda reserve in Wolong, Sichuan province, he concluded that in the wild, two to five male pandas will compete against each other to mate with a female during her brief period of fertility. But in many zoos, males do not compete for females — the norm is to keep pandas in pairs of one male and one female, an arrangement that seems to cool their desire to mate.

The lack of success in panda breeding in captivity means scientists should place more attention on studying pandas in their natural habitats, Pan said.

"When we try to assess the future of the giant panda as a species, we need to look more at the ones in the wild, instead of focusing on the ones in the zoos that don't give birth," Pan wrote. "Just like in human society, we don't pay attention only to the old ones in the nursing homes; we do research on the young and dynamic population."

Since 2010, Chinese biologists and zoologists have started making efforts to return some pandas bred and raised in captivity to the wild, dressing up in panda costumes sprayed with urine and feces to play with them in their natural habitats and teach them how to survive.

But with the practice still in its experimental stage, only two or three pandas a year are selected, and one or two per year will end up in the wild, said Huang Yan, deputy chief engineer of the China Conservation and Research Center for the Giant Panda.

Those who successfully adapt to life in the wild in theory have the freedom to roam across 6 million acres of land divided into 67 giant panda reserves. But urbanization and infrastructure construction are encroaching upon the vast wilderness, leading to fragmentation of the land and blocking the corridors pandas have traditionally used to traverse their sanctuaries.

A railway line linking Sichuan's capital, Chengdu, with Lanzhou in neighboring Gansu province to the north and a section of provincial highway 302 have blocked one such route in Maoxian County in the north of Sichuan province. In the west of Sichuan, provincial highway 208 and a railway linking Chengdu and Kunming to the south have cut across a corridor in Yuexian County.

The construction of electricity transmission lines and hydropower stations, along with mass tourism, are also contributing to the problem.

These developments are not just threatening the habitats themselves, they are endangering the sustainability and health of the panda population. Without the freedom to roam, pandas tend to inbreed, increasing the likelihood of cubs being born with genetic disorders.

But some scientists warn that the entire ecosystem of the panda's habitat needs to be managed and protected — not just the cuddly creature itself.

Xie Yan, an associate research professor at the Institute of Zoology of the Chinese Academy of Sciences and former China country program director of the Wildlife Conservation Society, said that many neglected species are under threat even though some high-profile animals like the panda are seeing their numbers increase.

Sun Quanhui, a senior scientific adviser at World Animal Protection, a nonprofit animal welfare organization, said: "We can't give premium care to one species simply because it looks cute or has some special position. Nature doesn't operate by depending on a few particular species. A healthy ecosystem can only work well when all animals are given the same opportunity of survival."