By An Limin, Bao Zhiming and Han Wei 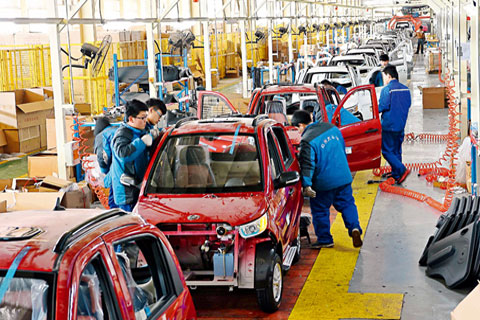 (Beijing) — The boom for China's electric vehicle makers may be nearing an end as regulators crack down on abuse of generous subsidies and draft tougher policies on incentives.

The proposed new regulations follow an eight-month nationwide investigation that found widespread cheating on subsidy programs by electric-vehicle makers. Investigators found that some companies collected hundreds of millions of yuan by inflating the number of vehicles they made. Sometimes they cashed in before making any electric autos at all.

Policymakers are revising the incentives that will be implemented in the next five years, sources close to the matter said. Under the program, which was installed in 2009 to encourage new-energy vehicle development, central and local governments have doled out hundreds of billions of yuan in subsidies to companies that build electric cars and plug-in hybrid and fuel-cell vehicles.

The incentive program helped make China the world leader in electric-auto production. Spurred by the subsidies, about 200 manufacturers across the country built 379,000 electric and hybrid vehicles in 2015, four times more than in the previous year, according to the China Association of Automobile Manufacturers.

Electric and hybrid vehicles sales in China more than quadrupled last year to 331,000, about 60 percent of the global total, making the country the world's largest electric-car market, followed by the United States.

But subsidies rather than sales became the main revenue source for many electric-auto makers, and penalties and the loss of incentive payments is already hurting profits. Suzhou-based Higer Bus Co. is one of five producers that the government sanctioned for subsidy excesses. The company is an example of the ripple effect across China's electric-vehicle industry of the subsidies and the impact of the government crackdown.

"It will not be easy to commit fraud in the future," said Song Qiuling, deputy director of the Finance Ministry's economic construction division. The government will set a higher threshold to qualify for subsidies on electric autos, and the size of the subsidies may decline to reflect lower production costs, he said. In addition, he said, regulators plan to build an internet-based platform to closely monitor electric-vehicle production, sales and operation.

In August, the Ministry of Industry and Information Technology published a set of plans to raise the bar for new-energy vehicle producers. This was followed by draft guidelines from the National Development and Reform Commission on Sept. 22 proposing to adopt a carbon-credit system similar to what California uses to encourage new-energy vehicle production. The plan is published for public feedback, and experts said this may eventually replace subsidies.

Stricter regulations will apply to electric-car production, sales and use, according to an MIIT official who asked not to be identified. In addition, regulators plan to tighten control over government subsidies.

Lucrative government subsidies have been the main force behind China's electric-auto boom. When rolled out in 2009, the policies aimed to put more than 1,000 units on the roads in each of 10 cities in three years. The plan was intended to help lower pollution and move beyond traditional auto making. The program was later expanded, and by the end of last year there were more than 1,000 electric cars running in each of 90 cities.

But a mismatch between reported sales and actual production capacity and unusual fluctuations in output drew the attention of government regulators. Agencies including the MIIT, the NDRC, the MOF and the Ministry of Science and Technology initiated an investigation in late January that covered 90 automakers that received new-energy vehicle subsidies between 2013 and 2015.

Investigators found that some companies falsified production reports and collected more in subsidies than they earned. In early September, the MOF levied penalties against five companies, including Suzhou Higer Bus, for subsidy fraud.

Suzhou GEMSEA Coach Manufacturing Co., the nation's eighth-largest electric-minibus maker, was found to have forged production and sales records for 1,131 electric buses in 2015 to receive subsidies worth 260 million yuan. It was also criticized for collecting extra subsidies by selling vehicles to its own subsidiaries. Authorities revoked its production license and ordered the company to pay back all the money it obtained illegally.

Suzhou GEMSEA halted production in March after it became the subject of investigation. "The company is going bankrupt," said a guard at the company's closed front door.

A source close to the investigation blamed local authorities for conniving with the companies to cheat as the subsidies require local government review of production certificates, sales records and vehicle registrations before applications go to the central government for final approval. Investigators found many companies were able to apply for vehicle licenses, a key requirement for subsidies, even before the vehicles rolled off the production line.

Sometimes, automakers "can get a hundred licenses with a photo of only one vehicle," said the source, calling government supervision "inadequate."

Many scholars have blasted the subsidy program for distorting the market.

"Annual electric-minibus sales around the world total 20,000 units," said Ouyang Minggao, a member of the Chinese People's Political Consultative Conference who is also a new-energy vehicle expert. But Chinese manufacturers "can reach that in one month" because the "current new-energy vehicle development has been motivated by subsidies."

Under the policy, a minibus producer could get as much as 600,000 yuan in subsidies from central and local governments for each bus they produced, almost equivalent to production costs.

Other companies are also feeling the pain of overreliance on government aid even though they were not involved in the scandal. Leading bus maker Zhengzhou Yutong Group Co. and Zhongtong Bus & Holding Co. said in separate statements that their operating capital was drained by the end of June because of delayed subsidy payments amid the investigation.