By Liu Xiaojing and Chen Na 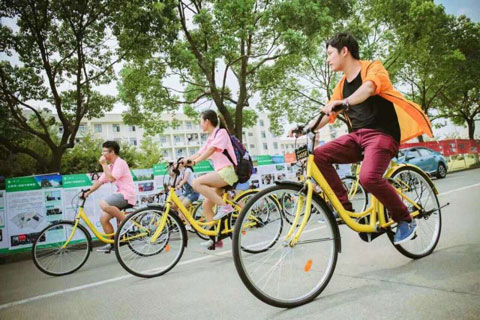 Didi, which bought Uber Technologies Inc.'s Chinese operation earlier this year, said in September that it had invested "tens of millions of U.S. dollars" in the bicycle-sharing platform, but did not disclose a specific figure.

Several investors in Ofo have links to Didi: Coatue participated in Didi's $3 billion funding round in April through a co-investment vehicle, while venture capital funds GSR Venture and Matrix Partners China were among the earliest investors in the ride-hailing company.

"We notified Didi before we invested in Ofo," Zhu Xiaohu, managing director at GSR Ventures, wrote on Fenda, a popular app where users pose questions and pay for the answers. "We are the vanguard for Didi, and when the time is right, Didi will come in and increase its stake."

Didi had been debating whether to set up its own operation or team up with a partner to provide a service for the "last three kilometers," Xu Chuansheng, founding managing partner at Matrix Partners China, was quoted as saying on the fund's social media platform. He was referring to the narrow alleyways in many cities that are inaccessible by car.

"After discussions with Ofo CEO Dai Wei, Didi decided to invest and completed the deal within two weeks," Xu said.

Ofo was set up in April 2014 by three Peking University students on the campus of the school in Beijing. The platform now has more than 1.5 million users in 20 cities, according to Didi. Nearly 70,000 bikes are shared every day, and there are more than 500,000 rides every day. Rental costs 0.5 yuan (7 U.S. cents) an hour for students and teachers, and 1 yuan an hour for everyone else.

To use the service, members locate a nearby bicycle using Ofo's mobile app and enter its license plate number into the app to get a one-time code to open the padlock. When they're done, they can leave the bicycle anywhere rather than a designated pickup and drop-off areas.

Didi has already launched services that go beyond standard ride-sharing. In July 2015 it started offering a designated driver service, allowing people who had been drinking to order a personal chauffeur to drive for them.

But Didi's foray into bike-sharing is likely to meet strong pushback from rival services like Mobike, a venture capital-backed startup based in Shanghai. Mobike reportedly raised $100 million this month in its latest round of fundraising with investments from Hillhouse Capital and Warburg Pincus, although Wang Xiaofeng, the company's CEO, would not confirm the figure to Caixin.