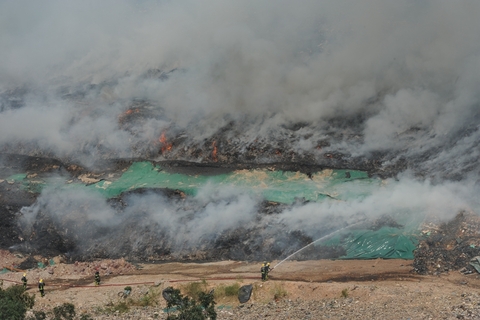 (Beijing) — A group of villagers near the northern port city of Tianjin has won a modest victory over the local environmental protection bureau, as China's Ministry of Environmental Protection (MEP) ordered the bureau to review its decision to withhold information on a garbage incinerator that has been built near the villagers' homes.

Zhang Zichen, a resident of Dongjiuhu village, told Caixin that the village had been informed by the MEP that the Tianjin Environmental Protection Bureau should make public about 200 copies of a questionnaire collected for an environmental impact study of the project pending a privacy review.

The 300 million yuan ($44.8 million) facility in a rural area bordering the city of Tianjin and Yutian county, Hebei province, is being developed by government-backed Dynagreen Environmental Protection Group Co. The incinerator can handle 700 tons of residential waste a day.

However, villagers living in areas surrounding the incinerator have long suspected that the developer used falsified questionnaires to obtain the required environmental impact clearance, Zhang said.

Residents from six Hebei villages applied to the Tianjin Environmental Protection Bureau in late June for access to information on 200 local residents whom the developer said it had surveyed for the environmental impact study.

Most of the questionnaires were signed by people other than those whose names were listed in the survey, and the names of some dead people were in the survey, Zhang said.

Surveyors hired by the developer had approached at least one villager with cash and gifts in return for his signatures in a number of questionnaire papers, he said.

Dynagreen Environmental Protection Group declined to comment on the accusations.

Local residents initially filed an application with the Tianjin environmental bureau to look at the questionnaires after some of their children became ill after the incineration plant began a trial operation at the end of April.

The bureau turned them down in July on the ground that papers contain private information.

The villagers then filed an appeal with the MEP requesting a review of the bureau's decision.

The MEP said the Tianjin Environmental Protection Bureau should conduct a privacy review of the information used in the survey and the ensuing environmental impact assessment, and then release the parts not deemed to violate residents' privacy.

Residents said they hope authorities will conduct a new environmental impact study and take additional appropriate measures to contain pollution from the incinerator.

Many Chinese cities — particularly several major metropolises like Tianjin that are besieged by landfills — have rushed to build incineration plants.