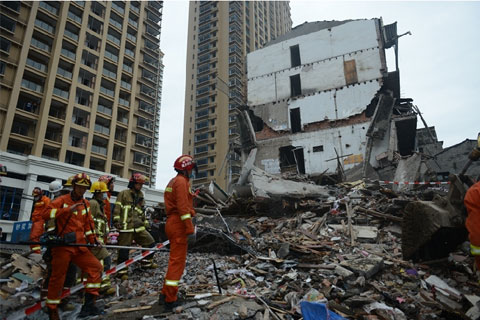 (Wenzhou, Zhejiang Province) — The four buildings in a slum area that collapsed Monday — killing 22 — in the eastern city of Wenzhou had already been "partially damaged" by government-backed demolition operations aimed at forcing out tenants, several local residents told Caixin.

The six-story buildings, which offered cramped quarters for factory workers at a nearby industrial park, collapsed around 4 a.m. on Monday, state-run China Central Television reported. Six survivors were pulled out of the rubble before the rescue was called off, the official Xinhua news agency said.

Wenzhou, in Zhejiang province, is an industrial hub for light manufacturing, including shoes and clothes, and it attracts thousands of migrant workers from rural villages. The land in Lucheng district on which the buildings stood was already earmarked for a housing project, and the local government has been trying to evacuate tenants for years.

Several workers from the neighborhood told Caixin that men — armed with hammers and other small tools — who had been hired by the local authorities have threatened to tear down the buildings several times. They had left after drilling holes in some walls and shattering windowpanes amid resistance from residents, they said.

"We don't know how the buildings stood for so long without collapsing because their structures were already damaged," said one resident who asked not to be named, fearing persecution by local authorities.

Property owners had neglected maintenance while they were demanding better compensation in return for giving up their land, locals said. Over 100 landowners had been negotiating for three years while demolition crews were trying to force out tenants, they said.

An initial survey of the site by government-appointed investigators blamed the poor quality of buildings constructed in the 1970s and '80s and the impact of recent rainstorms for the fatal disaster, Beijing News reported, citing Lucheng district Director Zhu Chongmin.

One tenant who was injured in the collapse told Caixin that he had complained to his landlord about the dilapidated state of the buildings after they "shook" when several typhoons hit the area last month. The man who identified himself only by his surname, Wang, said there were 40 to 50 residents, mostly factory workers, living in the damaged structures.

"I was sleeping when I was buried in rubble," said Wang, a migrant worker. "I'm lucky to be alive because a piece of the wooden roof fell on me, protecting me from the falling rubble."

Lucheng district police, in a statement on Wednesday, said they had detained four landlords in connection with the incident without stating the charges, as investigators were still trying to determine the cause of the collapse.

Forced demolitions, often at the behest of local governments, have been a source of growing public discontent as they have led to a number of deaths in recent years.

In July, a demolition crew hired by the local government tore down a part of a hospital in Zhengzhou, Henan province, while doctors and patients were still inside, damaging 4 million yuan ($600,000) worth of medical equipment, local news website Dahe reported.