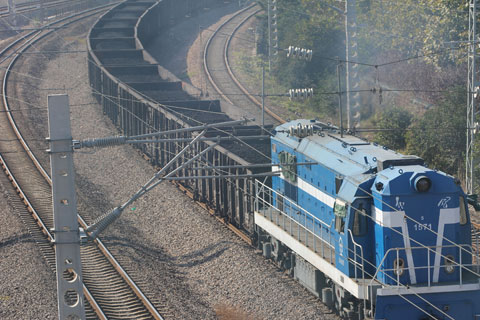 China Railway Corp. (CRC), the country's railway operator, saw a 4.6 percent year-on-year increase in cargo volumes in September, the first time in more than two years that the CRC has seen back-to-back months of growth, the company said Wednesday.

Rail freight volumes at 15 out of the 18 CRC subsidiaries increased in September, compared to the same period last year, a CRC employee told Caixin. From Sept. 23-25, more than 130,000 cars per day were loaded with goods, the first time the figure has risen above the benchmark since December 2014.

The company saw 32 months of decline in freight volumes amid an economic slowdown before the fall ended in August, with the monthly volume rising 1 percent to 279 million tons, data from the National Bureau of Statistics showed.

Part of the growth is driven by increasing demand for coal shipment by train, as the central government cracks down on overloaded vehicles — a common practice among business owners in China to cut transportation costs — according to sources inside CRC subsidiaries.

A new set of rules issued by the Ministry of Transport stipulated that as of Sept. 21, a truck and the goods it carries cannot weigh more than a combined 49 tons. At the Taiyuan subsidiary of CRC in Shanxi province, one of China's biggest coal-producing areas, producers rushed to the company to book freight trains after Beijing announced the policy at the end of August, a subsidiary employee said.

"We haven't seen anything like this in years," the source said.

In Urumqi, Xinjiang, another coal-rich region, freight volumes increased 24.5 percent in September, the highest among all CRC subsidiaries, the company insider said.

CRC lost a massive 7.3 billion yuan ($1.1 billion) in the first half of this year, and the rail operator's debt rose 9 percent to 4.2 trillion yuan, according to an audit report viewed by Caixin.