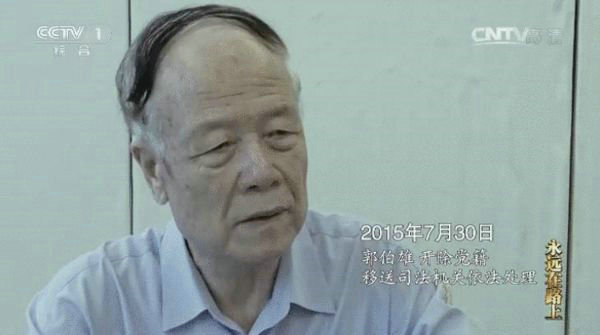 (Beijing) — More than a dozen senior Communist Party officials indicted for corruption have appeared in a new show on state-run China Central Television (CCTV) to offer personal accounts of their crimes.

The eight-part documentary, co-produced by the state broadcaster and the Central Commission for Discipline Inspection (CCDI), the nation's top anti-graft watchdog, came a week before the ruling Communist Party's Central Committee is to convene for a key session.

In the first episode, which aired in prime time on CCTV on Monday night, Bai Enpei, a former party secretary for the southwestern province of Yunnan, recounted how he first became tempted by material wealth after he survived a major illness in 2005.

"After I saw other people living in luxurious homes, driving around in expensive cars and even owning private jets, I told myself that I wanted to live like that," he said on camera.

Bai, also a former senior member of the country's top legislature, the National People's Congress (NPC), was sentenced to death with a two-year reprieve for taking more than 247 million yuan ($36.7 million) in bribes between 2000 and 2013 when he was the party chief in Yunnan and the northwestern province of Qinghai.

Bai, 70, is accused by a CCDI official who appears in the program and a former associate of letting his wife, Zhang Huiqing, take money and gifts from associates in return for helping them secure land for redevelopment.

"On one occasion, Zhang said she really liked a bracelet and told me to buy it for her, which cost me 15 million yuan," said Zhou Hong, one of Bai's associates.

CCDI investigators said they were stunned by the extensive collection of unlawfully acquired gifts in Bai's possession, including jade and emerald sculptures, mahogany furniture, and tea.

"It took us more than 10 days to go through their illegal possessions," CCDI official Zhou Tao said in the show.

It is not clear when the show was produced.

The program is the latest attempt to drum up support for anti-corruption operations introduced by Xi Jinping in late 2012.

Zhou Benshun, former party secretary of Hebei province, followed a similar fall from grace when he used his influence to help cultivate business connections for his son.

"I didn't have to say much," Zhou said on camera. "But my presence was enough to let them know my son could help them get things done due to his connections."

Zhou, 63, was charged earlier this month with accepting bribes linked to enormous amounts of money and gifts he took from 1995 to 2015.

In the show, Zhou was also accused of violating Xi's austerity rules because he refused to live in a home assigned to him by the government in accordance with his rank when he was the party secretary of Hebei province from 2013 to 2015. He lived instead in a 16-room villa in an army compound in downtown Shijiazhuang, Hebei's provincial capital. Two nannies and two cooks hired by Zhou's family cost the public purse 1 million yuan a year, CCDI investigators found.

Zhou offered protection to other corrupt officials in the province, a strategy he used to cover up his own irregularities, according to Gu Gui, another CCDI official appearing on the show.

Guo, a former vice chairman of the powerful Central Military Commission (CMC), was sentenced to life in jail by a military court in late July for accepting bribes.

Xu, also a former vice chairman of the CMC, died of bladder cancer in March 2015 while he was under investigation for alleged corruption.