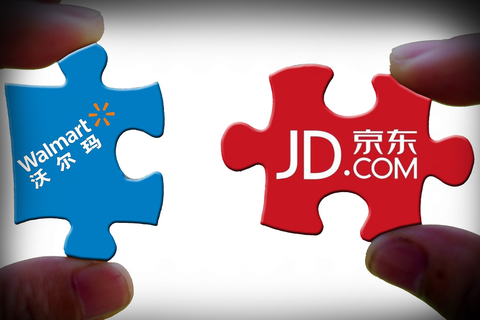 JD.com agreed to enlarge its website to include a flagship store for Wal-Mart's "warehouse club" division, Sam's Club. A warehouse club is a store that sells wholesale quantities of products to the public.

The companies also agreed to let Wal-Mart shoppers in Guangzhou and Shenzhen take delivery of purchased products through JD.com's delivery network. Also, during a 10-day promotional period, JD.com shoppers will be able to buy items through Sam's Club at member-discount prices.

The closer partnership is designed to give JD.com shoppers wider access to a variety of imported products that Wal-Mart sells, a JD.com statement said.

On Singles Day last year, JD.com reported about 10 million purchases during a 10-hour period, up 180% from the previous year. That same day, rival Alibaba Group — China's largest e-commerce company and creator of Singles Day in 2009 — reported 91 billion yuan ($13.5 billion) in sales through its Tmall website.

Wal-Mart and JD.com launched a strategic alliance in June when the former sold its Chinese online shopping site, Yihaodian, to the latter for equity worth about $1.5 billion.

Some saw the deal as a setback for Wal-Mart, which operates more than 400 brick-and-mortar stores in China and has been in the country for about 20 years.

Wal-Mart bought a 17.7% stake in Yihaodian in 2011 and took full control in July 2015. But the website struggled in a market crowded with domestic players, with Alibaba, JD.com and Suning vying for a customer base estimated last year at 380 million, three times more than there were in 2010, according to the marketing research firm Nielsen.

Under Wal-Mart's control, Yihaodian's share of the online shopping market shrank to less than 0.3% in 2015 from 2.6% in 2013, according to the e-commerce research website 100ec.cn.