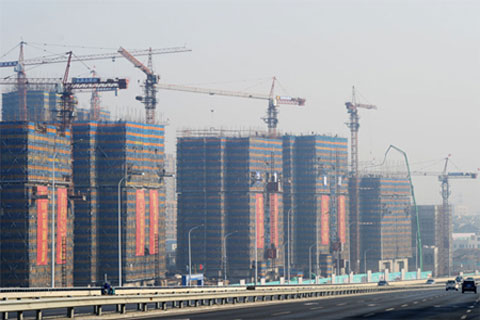 (Beijing) — China's securities regulators are taking new measures to clamp down on efforts by real estate companies to raise cash amid continuing efforts to cool the nationwide property frenzy.

Developers have been prohibited from issuing bonds and listing on the Hong Kong Stock Exchange, according to sources close to the China Securities Regulatory Commission (CSRC) and the National Development and Reform Commission (NDRC) — China's top economic planner, which also approves the issuance of enterprise bonds.

Specifically, the two government bodies will no longer approve requests from property firms to issue bonds at home or overseas, according to sources. Tapping the Hong Kong stock market for funds will also be out of the question because the CSRC will reject an IPO plan if it's filed by a real estate company, sources said.

Domestic stock exchanges have been told to suspend the issuance of corporate bonds by all Chinese real estate companies, including those that it had approved, according to an employee of a securities firm that had received a notice from the Shanghai bourse about the new rule.

"There is no timetable on how long the suspension will last," the employee said.

Property developers were previously able to raise funds by issuing enterprise bonds on the interbank market, which is supervised by the National Association of Financial Market Institutional Investors (NAFMII), or selling corporate bonds on stock exchanges, which are regulated by the CSRC.

Some developers and companies with real estate businesses also borrowed money through enterprise bonds to acquire land and build homes, according to one source close to the NDRC. Compared with corporate bonds, however, enterprise bonds are a relatively small borrowing channel for real estate firms, the source said.

The curb on bond issuance is the latest in a slew of measures the Chinese government has taken over the past few months to rein in home prices by making it financially more difficult for developers to acquire land. Record-breaking land deals, which are often referred to as "land kings," have attracted more attention this year than they have in the past.

Expensive land prices drive expectations that home prices will continue to spike, even though in some cities such as Beijing and Shenzhen they have increased by more than 30% from September 2015 to the same month this year, according to data from the National Bureau of Statistics (NBS).

In the interbank market, the regulator NAFMII has required financial institutions underwriting short-term financing papers and medium-term notes to monitor more closely how their clients use their bond loans, over concerns that firms may break rules by using the funds to buy land.

Banks, too, have been told recently by the banking regulator to stop secretly aiding property developers through intermediaries that hide the original sources of capital.

These measures will greatly hamper the ability of many developers to raise funds, said Chi Guangsheng, a fixed-income analyst at Everbright Securities. He said small companies may not be able to survive the tougher financing environment, and it may lead to consolidation in the property industry.