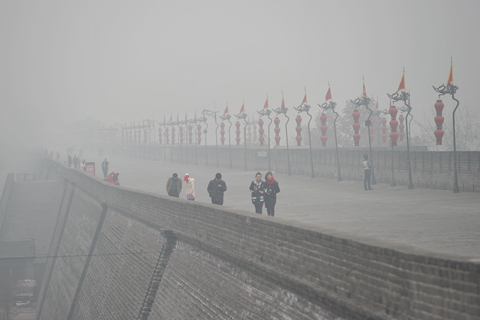 The officials, including the former head of the Environmental Protection Bureau in the city's Chang'an district, were taken into police custody in March after they were found to have stuffed air-sampling devices with cotton yarn to improve the readings, the China Business View newspaper reported earlier this week.

The air-quality monitoring station in the district is one of over 1,300 such facilities around the country under the direct control of the Ministry of Environmental Protection, according to China Environment News, a newspaper affiliated with the ministry.

The site and another station in Xi'an in the northwestern province of Shaanxi had been in the care of a local contractor the ministry hired, Xinhua reported.

But the accused officials secretly obtained a backup key to the site, as well as password to computers connected to the ministry's servers, when they assisted with the relocation of the monitoring station and the testing of the new air sampling devices in February, China Business View said, citing police investigators.

Colluding with each other, the officials would occasionally sneak inside the facility to stuff cotton yarn into the air-quality detectors' pipes, among other acts of sabotage, to manipulate air quality readings, the local newspaper said.

The investigation is the latest in a string of scandals that have implicated Chinese environmental protection officials for falsifying air-quality data. Many are motivated to alter the data because their performance appraisals are tied to whether pollution readings improve.

The environmental protection bureau in Hanzhong, also in Shaanxi, made national headlines in late January 2015 when it reportedly deployed tanker trucks to spray water in areas around air-quality monitor stations, imitating the way rain can lower pollution levels.

The scandal in Xi'an came to light after staff at the ministry's air-quality monitoring headquarters in Beijing noticed abnormal changes to air quality readings in Xi'an in March.

An inspection revealed that local officials even deleted surveillance camera data at the station in an attempt to cover up their activities, according to China Business View.

A spokesperson from the Xi'an Environmental Protection Bureau, which administers the district authorities, told Xinhua that the five officials are now in the hands of prosecutors and might face criminal charges.

Officials guilty of massaging pollution data should face tougher penalties because such misconduct is worse than illicit emission of pollutants or the discharge of wastewater, said Wang Can, a law professor at China University of Political Science and Law.

"The practice can do more damage by compromising decision-making in environmental protection policies at the national level," he said.