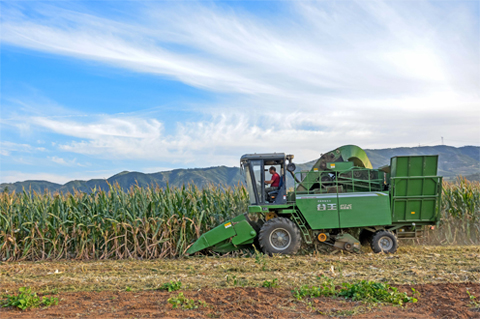 A farmer harvests a corn crop in a field in Yiyang, Henan province on Sept. 8. Genetically modified corn is not allowed to be planted in China for commercial use. Photo: Visual China

(Beijing) — As this year’s corn harvest approached, the fields of 44-year-old seed producer Li Yongjun lay bare. A couple of months earlier, agricultural authorities in Fuhai county, northern Xinjiang, had conducted random tests and discovered that some of his corn was genetically modified. His entire plot was then burned to the ground.

Li’s case is not an isolated incident. In an apparent bid to appease a public overwhelmingly opposed to crops that are genetically modified organisms, or GMOs, the Ministry of Agriculture has been putting pressure on local governments to crack down on the booming underground market for the seeds, which are either smuggled in or bred on-site. In the process, hundreds of acres of cornfields found to have had illegal GMO corn have been set ablaze across China.

Genetically modified food is one of the few issues where China’s leaders have found themselves largely beholden to an uncharacteristically outspoken public. While many top leaders and policy directives laud GMO crops as the solution to China’s food security, the public overwhelmingly views them as potentially dangerous — even poisonous.

Li’s case highlights how the government is torn between reassuring the public it has control over China’s food supply and convincing them that GMO crops are safe. Following media reports of the destroyed GMO corn, the Ministry of Agriculture issued a statement saying that while the corn was illegal, it did not pose a threat to food safety. The result is a series of mixed messages that have failed to sway a skeptical public and have allowed a booming underground market to thrive.

In 2015, Li Yongjun traveled from his native Hebei province to the Xinjiang autonomous region, where he found work breeding corn seeds. He and two fellow farmers rented a 329-acre plot of land from the Fuhai branch of the Xinjiang Ding Sheng Feng He Agricultural Investment Co., which in turn had been contracted by the Inner Mongolia-based Houde Seed Co. to produce corn seed.

On May 21, the regional seed management station collected samples from Li’s fields. Tests showed that the male parent samples were genetically modified. Not long after, the Fuhai County Agricultural Bureau imposed a fine of 10,000 yuan ($1,470) on Ding Sheng Feng He and ordered the genetically modified male parents destroyed. In an instant, months of Li’s hard work went up in smoke.

Li maintains that the problem lies with the seeds provided by Houde. He told Caixin that he had no idea the seeds he was planting were genetically modified, and that Houde Chairman Wang Xiaodong had promised to compensate him for his loss. Since then, Li has been unable to reach Wang. Houde firmly denies illegally growing GMO crops.

At the end of September, the results of an investigation against Houde were sent to the Ministry of Agriculture. To date, the ministry has not released any information about the case.

The commercial production of GMO crops is still largely illegal in China. Only a few genetically modified crops — including strains of cotton, tomato and papaya plants — have been approved for commercial use.

The control of staple crops is especially tight. In 2009, two strains of pest-resistant genetically modified rice and one variety of phytase corn were issued GMO safety certificates, but they remain confined to experimental plots. China also allows a few types of GMO corn to be imported for use as animal feed.

But despite being illegal, the lure of GMO corn that promises less work and higher yields has proven irresistible to many farmers and seed-producing companies.

“These seeds are especially resistant to insects,” a farmer surnamed Sun told Caixin about his corn crop. He conceded that many farmers understand that genetic modification is behind the exceptional performance of certain crops that are not labeled as GMOs.

Most of China’s GMO corn can be traced back to American agribusiness giant Monsanto’s patented insect-repellent MON 810 strain. The coveted seeds are entering the Chinese market through two main channels, according to a paper written by International Rice Institute professor Wang Dayuan. The first involves breeding a Chinese version of MON 810 using GMO corn found in imported animal feed; the second involves bringing in stolen MON 810 seeds or corn to China from the U.S.

Li’s case is just one of many instances of illegal GMO corn production in China, and authorities around the country are ramping up efforts to eradicate it.

In August, nearly 500 acres of GMO corn was discovered and destroyed in Shaanxi province’s Jingbian county by provincial seed management officials. An agricultural broker surnamed Liu was arrested in connection with the illegal crops and remains under investigation.

China’s leaders are still betting on GMO crops as a solution to China’s food security. Even as field after field of GMO corn is burned to the ground, the government is going to great lengths to remind the public that while they are still illegal, GMO crops are safe to eat.

“The GMO corn discovered in China is licensed and widely cultivated abroad,” Agriculture Minister Han Changfu said at a news conference in March, adding that the safety of the corn is guaranteed.

In the past 10 years, a Chinese annual policy document has mentioned GMOs eight times. In 2016, the No. 1 Central Document called for the careful promotion of GMOs on the basis of guaranteeing safety. As part of the 13th Five-Year-Plan, which spans 2015-2020, “China will promote the industrialization of GMO insect-resistant cotton and corn,” said Liao Xiyuan, director of the Ministry of Agriculture’s Science and Technology Education Department, at a news conference this year.

But overall, progress is slow. The process for obtaining a license to commercially produce GMO crops is tedious and daunting for prospective growers. After obtaining a safety certificate, the crop in question also has to go through an examination and approval process. The Ministry of Agriculture has not even begun to examine staple crops like wheat, corn and soybeans, said Wan Jianmin, vice president of the Chinese Academy of Agricultural Sciences.

Some scholars are worried that the public will see the Ministry of Agriculture’s recent crackdown on illegal crops as an indication that they are unsafe, further stalling efforts to commercialize GM crops.

Hao Dongyun, Director of the Institute of Agricultural Biotechnology at the Jilin Academy of Agricultural Sciences, told Caixin: “From the perspective of enforcing and protecting the dignity of the law, I think (the ministry’s) actions are correct. But unfortunately, these actions convey a negative message to the public that genetically modified corn is unsafe.”