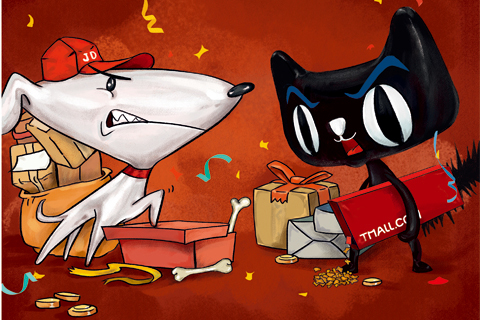 (Beijing) — For China's 720 million Internet users, websites run by the country's two biggest e-commerce companies, Alibaba Group and JD.com, have increasingly become the preferred shopping destinations. From trendy clothing and exquisite accessories to household appliances and the latest tech gadgets, a mouse click can get them almost anything.

Now the e-commerce behemoths are going after everyday indispensables — groceries and household items. Over the past few months, both have poured hundreds of millions of yuan into a price war aimed at dragging shoppers away from supermarkets and corner stores. Amazon.com Inc., Wal-Mart Stores Inc. and other online retailing giants are blazing a similar trail in the U.S.

As JD.com and Alibaba Group Holding Ltd. approach their respective ceilings for growth in sales of other goods, groceries will become the next battleground, said Xu Xin, CEO of the venture capital firm Capital Today, which invested in JD.com. Conquering the market for fresh food and other grocery items may eventually enable e-commerce companies to take control of as much as half of China's total market for consumer goods sales as Alibaba Chairman Jack Ma expected, Xu said.

In a 2015 letter to shareholders, Ma predicted that 'over 50% of China's consumption will be conducted online within 10 years.'

To reach that goal, 'there will absolutely be a war between Alibaba and JD.com,' said Cheng Shaoxiong, North China chief for the supermarket division of Tmall, Alibaba's business-to-consumer site. He said online grocery sales are the last frontier for e-commerce companies.

Online retail is flourishing in China thanks to the country's highly efficient and low-cost courier industry. In 2015, online purchases accounted for 10.8% of China's 30 trillion yuan ($4.4 trillion) in retail sales, a 32% increase over the previous year, according to the National Statistics Bureau. For fast-moving consumer goods, including toiletries, soft drinks and fresh food, nearly 20% of the purchases were made online.

By 2020, online sales of fast-moving consumer goods will grow at a much faster pace than apparel and electronics to expand fivefold from today and reach 1.2 trillion yuan, according to Yihaodian, one of China's earliest online grocery sites.

Fresh food and grocery items with quick turnover and higher profit margins have long been the competitive strength of large supermarket chains such as Wal-Mart and Yonghui Superstores. For e-commerce companies, moving into the sector requires heavy investments in logistics, warehousing and distribution capabilities.

Alibaba and JD.com have made tit-for-tat moves to get footholds in the blossoming online grocery market. On Oct. 19, Alibaba and smaller rival Suning Commerce Group Co. said they have established a new e-commerce joint venture with an investment of 1 billion yuan to manage Suning-owned stores on Alibaba sites. The venture is expected to combine the strengths of both companies. It is also a step forward for a partnership formed last year when Alibaba became Suning's second-largest shareholder through an equity swap.

The next day, JD.com stepped up its partnership with Wal-Mart. It opened Wal-Mart-branded stores on JD.com, using its huge logistics network to offer fast delivery for Wal-Mart in some cities. Wal-Mart also invested $50 million in the JD.com-backed online grocery specialist New Dada. JD.com and Wal-Mart had formed a strategic alliance in June when Wal-Mart sold its China online grocery store, Yihaodian, to JD.com.

But JD.com is expanding at a faster pace. In the quarter between March and June, JD.com's gross merchandise volume, a measurement of total sales value, grew 47% from March to June a year earlier. Alibaba's rose 24%.

'JD.com is coming within shooting range of Alibaba,' said a source close to Alibaba's top management. Since the beginning of this year, Alibaba has set detailed monthly targets to counter JD.com, this individual said.

Despite their healthy sales growth, both companies face the same challenge — a slower expansion of users after years of explosive growth. Alibaba had 423 million active users while JD.com has 188 million, according to company documents.

Alibaba tested the supermarket waters in 2012 by launching Tmall grocery services in Shanghai and Hangzhou. But the 'business proved to be very difficult due to high logistics costs,' said a former Yihaodian manager who decline to be identified.

It was not until July 2015 that the grocery business was listed as one of Alibaba's four pillars of online retailing, along with Taobao, Tmall and Juhuasuan. That year, Alibaba spent 1 billion yuan in Beijing alone to subsidize grocery vendors and shoppers. Between 2012 and 2015, Alibaba made heavy investments in logistics and warehouse facilities, enabling it to engage in fresh produce sales, according to a staff member at Tmall.

JD.com quickly set up its own online supermarket division in October 2015. According to company financial reports, in the first quarter this year, JD.com's grocery sales rose 70% from the previous year, while Alibaba's supermarket sales grew 220%.

The expansion into groceries by the two e-commerce giants crushed smaller players. Wal-Mart-backed Yihaodian's market share in the country's e-commerce market shrank to less than 0.3% in 2015 from 2.6% in 2013, according to the e-commerce research website 100ec.cn. In the first quarter this year, the site barely recorded any growth from a year earlier.

That prompted Wal-Mart's sale of Yihaodian to JD.com in June in exchange for JD.com equity worth about $1.5 billion. The strategic alliance with Wal-Mart is expected to give JD.com shoppers wider access to imported Wal-Mart products and provide more ammunition for JD.com's battle with Alibaba.

After the deal, JD.com announced a 1 billion yuan investment in Yihaodian over the next three months and an ambitious goal of developing JD.com as the largest grocery retailer in three years, according to JD.com Vice President Feng Yi.

libaba quickly promised 2 billion yuan in subsidies for shoppers on its Tmall Supermarket site and 2 billion yuan of new investments to improve logistics and the supply chain.

The price war has escalated since September as Tmall Supermarket poured 180 million yuan into discounts for grocery shoppers Sept. 1-9. At the same time, JD.com offered 50% discounts on grocery items.

Some experts have questioned the price-war strategy.

'The gross profit margin of grocery items is less than 20%,' said Li Chengdong, an independent e-commerce analyst. Offering such big discounts 'is like burning money.'

A source close to Tmall Supermarket said Alibaba can afford the discounting because of the umbrella group's profitability.

But concerns over heavy spending are greater for JD.com, which has yet to make a profit after 12 years in business. In June, JD.com's share price on the New York Stock Exchange slumped to a historical low since its September 2014 listing. An APS Asset Management report had called money-losing JD.com 'wildly overpriced.' The stock revived in August after the second-quarter financial report indicated a narrowing loss.

After more than a decade, Alibaba and JD.com have developed distinct identities in online retailing. Alibaba's Tmall and Taobao are the must-go places for many apparel shoppers because of their selection, offered by millions of vendors. JD.com has won more shoppers seeking branded electronic products. Alibaba has been focusing on operating platforms for numerous vendors and shoppers, while JD.com mainly sticks to direct sales backed by its highly effective, self-operated logistics network.

But as the grocery war unfolds, both companies have sought to fine-tune their respective strategies and gradually move in each other's direction. JD.com's Feng said the company's supermarket division aims to challenge Alibaba's strengths in cosmetics and apparel by expanding product variety.

Meanwhile, Alibaba recently said it sees growth potential in home appliance and cellphone sales. The company has actively expanded using its logistics division Cainiao, which now operates more than 128 warehouses across the country.

Backed by Cainiao's delivery capacity, Tmall Supermarket has adopted a JD.com-style direct-sales model, offering fresh produce sent directly from its own warehouse, rather than a third-party supplier. At the same time, JD.com has been gradually changing its business structure by inviting more third-party vendors onto its platform. According to company data, third-party vendors accounted for 45% of JD.com's gross sales in the third quarter, up from 40% a year ago.

As the two companies' strategies converge, both may increasingly face the same challenges, experts said. For instance, JD.com's standardized customer services have long been blamed for a lack of interaction with shoppers, failing to lure users to surf among its product catalogue as they usually do in Taobao and Tmall. At the same time, the huge number of vendors on Alibaba's platforms has made controlling counterfeit or substandard products a longstanding headache.

The e-commerce giants' efforts to reshape their businesses echoed Alibaba Chairman Ma's call for e-commerce companies to adapt a radical change in the global retail industry as the boundary between online and offline sales becomes increasingly blurred.

'In the coming years, we anticipate the birth of a reimagined retail industry driven by the integration of online, offline, logistics and data across a single value chain,' Ma wrote to Alibaba shareholders in a letter last week. 'With e-commerce itself rapidly becoming a 'traditional business,' pure e-commerce players will soon face tremendous challenges. This is why we are adapting.'