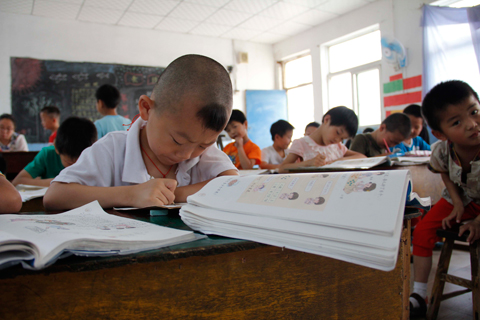 Students study at a private school in Beijing that caters to migrant workers' children on May 28, 2015. Photo: Visual China

China's top legislature, the National People's Congress (NPC), banned for-profit schools from offering classes from the first through ninth grades earlier this week, pushing them to switch to a nonprofit status or shutdown. Lawmakers say the amendment to a 2008 education act will stop for-profit educators from "infringing on an area that should be the government's responsibility" and minimize inequality in China's education system. In China, all children are entitled to nine years of free, compulsory education, which includes six years of elementary school and three years of middle school.

The NPC's latest restrictions on private education will hit rural children, whose parents have migrated to cities, the hardest.

Data collected by the National Institute of Education Sciences (NIES) show that 12% to 13% of children currently in elementary or middle school attend private schools. Rural children — some left in the care of grandparents or relatives, and others who migrate with their parents to cities — account for more than half of these private school students. The rest are mostly students at expensive private schools in Beijing, Shanghai, Guangzhou and Shenzhen.

Many migrant parents have no choice but to send their children to private schools. Public schools in large cities where they work have increasingly raised entry requirements for migrant children, but at the same time, public schools in their hometowns frequently suffer from poor standards and poor teacher-to-student ratios. Parents who are far away and unable to constantly supervise their children's education feel that private schools are more reliable.

Private schools attended by rural children are mostly funded by investors, not donors. Once these schools switch to a non-profit status, many investors will likely withdraw their support. Nonprofit private schools usually receive government subsidies, but these subsidies will make up for only a small portion of the total funding that schools could lose as private investment dries up.

Students paying middle fees at prestigious urban private schools will also be affected by the latest rules. More parents might choose to send their children abroad rather than pay for increasingly government-influenced private schools at home.

Private education in China has boomed in recent years because it can cater to needs that are underserved or left untouched by the rigid public school system.

In 2006, the government abolished school fees for public elementary and middle schools, which caused many private school students to return to public education. Before that, 2 out of 5 elementary and middle school students in the country were enrolled in a private school. This figure dropped to around 5% the year fees were axed, but has risen to 10% in the decade since.

While free education remains a big draw, there are still a significant number of parents who prefer private schools.

Ultimately, the new law will do little to reduce inequalities in China's education system. The difficulty of enforcing such a law will mean that most private education providers can continue to exploit loopholes in the rule and generate profits while officially appearing to be non-profit institutions.

At the moment, China lacks many of the mechanisms that support non-profit private education that exist in other countries, such as a tradition of individuals or non-governmental organizations making financial endowments to schools. The latest clampdown on for-profit schools will only result in superficial administrative changes. To reduce inequality, China needs to consider the real needs of students instead of policing an arbitrary distinction between "non-profit" and "for-profit" schools.

Chu Chaohui is a researcher at China's National Institute of Education Sciences.