Professors Clash Over Proper Role of Government in Economy 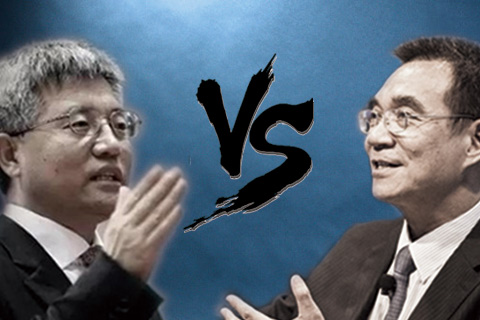 Chinese economists have long struggled with the ideological gap that separates free-market advocates and supporters of government controls on market forces.

That struggle was evident Wednesday during a debate between two prominent Peking University economists firmly entrenched on opposite sides of the debate.

"I haven't seen a country that's achieved economic growth without an industrial policy," Lin said during the debate, sponsored by the university's National School of Development.

His opponent, professor Zhang Weiying, a free-market advocate, begged to differ. "Industrial policy is just a planned economy in disguise," he said. "In the end, both will fail for the same reasons."

While admitting some governments have applied industrial policies in controversial ways, Lin called government controls "rational" and the basis for economic success in many countries, including Japan and South Korea.

China's ongoing transition to a market-based economy — including its overtaking Japan to become the world's second-largest economy — has relied on labor-, capital- and resource-intensive industries. But the transition's negative side effects have included structural imbalances and excess capacity in certain sectors. Moreover, some state-owned enterprises such as telecoms have been challenged by disruptive innovators, such as social networks.

Zhang said industrial policy can foster greed. For example, companies may collude with government officials to win special favors. And policymakers can make mistakes, given that even the most well-informed intellectual cannot always predict market trends.

In any country, Zhang said, "a free market and entrepreneurs can make the best of comparative advantages."

Lin, however, believes a combination of market forces and active government involvement is needed to foster industrial progress. Japan's steel, oil and auto industries contributed to double-digit growth in the gross domestic product in the 1960s thanks to government policies, he said.

But Zhang said Japan's auto industry would never have taken off if not for the fact that Honda Motor Co. Ltd. founder Soichiro Honda opposed a 1961 industrial policy barring his company, which then made motorcycles, from building cars. And industrial policies have done nothing to help Japan's 20 most successful industries, said Zhang, citing a study by Harvard University professor Michael Porter.

Lin admitted some industrial policies have triggered economist objections because they were improperly applied. "Some nations support an industry that has already lost its edge only because it stabilizes the labor market," Lin said, referring to the European Union's dairy-sector subsidies.

Wednesday's debate marked the latest phase in an ongoing discussion between Lin and Zhang who, despite their opposing views, are colleagues and friends.

The two clashed last summer when Lin, in a speech, argued in favor of industrial policy. Zhang took the opposite position at a forum a few days later. They've also exchanged views in publications over the years.

The latest event was their first face-to-face clash in public on industrial policy.

The academic community has been closely following the Lin-Zhang debate. And some economists have taken sides.

Zhuo Yongliang, a guest researcher at the China Society of Economic Reform, disagrees with Lin. He said market forces and government controls, which Lin thinks should work together, cannot get along.

Wu Jinglian, a government adviser, thinks the days of industrial policy have passed. Wu favors boosting economic growth through a "policy of competition" that encourages fair play and blocks monopolies.