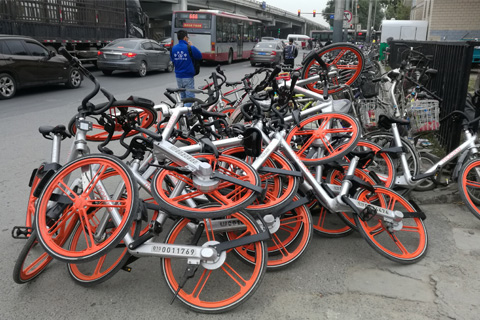 Mobikes left by commuters are piled up near the entrance of a railway station in eastern Beijing on Oct. 27. Photo: Wu Gang

(Beijing) — Shanghai railway police have ordered online bike-rental firms to educate users on parking rules, after a string of incidents where bikes were left blocking entrances to subway stations in the city during rush-hour.

Neon-colored bicycles that can be unlocked using a smartphone app, and left anywhere after use, have flooded large cities such as Beijing, Shanghai and Guangzhou in recent months. They are popular among commuters who want a quick way to cover the final miles between public transport hubs and their homes or offices.

But dozens of bicycles left near entrances to subway stations or bus stands have obstructed traffic and inconvenienced commuters, said Shanghai railway police on a post on their official microblog account on Nov 8.

Railway police had summoned representatives from two of China's biggest bike-sharing startups, Ofo and Mobike, on Oct. 24 and Nov. 3 and ordered them to run awareness campaigns for users to tackle the issue.

A Mobike employee who wished to remain anonymous told Caixin that the company would include a reminder on good parking etiquette in their app and conduct an awareness campaign on social media.

Mobike, founded by the former general manager of Uber Shanghai, raised $100 million in September. Its major rival, Ofo, which started as a student project at Peking University, said it had received $130 million in venture funding in early October, and that it was in talks with ride-sharing juggernaut Didi Chuxing to integrate its services to Didi's app.

Mobike rents over 20,000 bicycles in Beijing, Shanghai and Guangzhou. It has already started a pilot program in Shenzhen and will expand to two more top-tier cities, the Mobike employee said.

Smartphone apps like Ofo have a GPS attached to each bike, allowing users to find the nearest bike and leave them anywhere after use, unlike government-run rental services that have complex registration rules and require users to park at designated bike stands.

But this high-tech approach has also created another headache other than warnings from police. Some users complain that they cannot find bikes because others were hiding them, or even keeping them in their apartments, for private use.