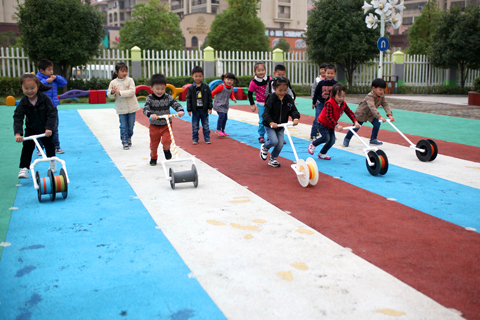 (Beijing) — China will have 14 million more preschool-aged children by 2021, the result of the country's scrapping the one-child policy in October 2015, and the country needs to build 100,000 new kindergartens to avoid a severe shortage of classroom seats, a study found.

The number of preschool-aged children will rise 27% to 66 million in 2021, an increase expected after the Communist Party said last year that all couples may now have two children, according to a recent research published in the Journal of Studies in Early Childhood Education.

The country needs to build 95,800 new "kindergartens" over the next five years to accommodate the rising number of preschool-aged children, the study said. It is a 43% increase from the current 223,700 preschools in the country, according to the research lead by Li Ling, a professor of education at Southwest University in Chongqing.

In the Chinese education system, kindergartens are for 3-to-6-year-olds, unlike many Western nations like the U.S., where kindergarten is for 5- and 6-year-olds and is part of local public-school systems.

The government needs to step up spending on public kindergartens and increase subsidies for private schools, it recommends.

About 16 million children, or nearly a quarter of all students in the preschool-age bracket, mostly in rural China, are unable to attend school, according to a study by Peking University's China Institute for Educational Finance Research released earlier this month.