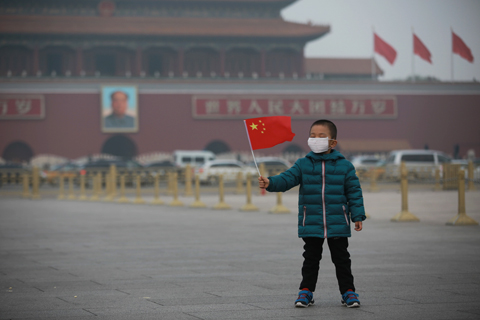 A boy wearing a smog mask waves a Chinese flag at Tiananmen Square on Nov. 10, a day when Beijing was hit by a heavy bout of smog. Photo: IC

(Beijing) — The level of arsenic, lead and cadmium — three cancer-causing chemicals — in Beijing's air has dropped significantly after the city enforced tougher curbs on coal burning four years ago, a study found.

The concentration of arsenic in inhalable particulate matter 2.5 micrometers or less in diameter, commonly known as PM 2.5 particulates, had dropped 86% by early 2016 from the 2012 winter season, research by Chinese academics and environmental advocacy group Greenpeace, released on Monday, said.

The level of lead in the capital's air has dropped by nearly half from 2012 to early 2016 and cadmium concentrations were down by over 40%, it said.

Long-term exposure to arsenic can cause cancer, heart disease, diabetes or result in developmental disorders, according to the World Health Organization. Inhaling lead and cadmium could also have a similar negative effect on health.

The research was led by Pan Xiaochuan, a professor from the Chinese Environmental Mutagen Society, a professional body of scientists who look at how environmental factors can damage human genes.

The team took air samples during the winter of 2012-2013 and again from November 2015 to March 2016, when coal-burning is at its peak to fuel the city's heating system.

The Beijing city government has closed three coal-fired power plants since 2014 as part of its push to limit the use of the fossil fuels for energy generation.

This has also led to a drop in the levels of sulfur dioxide, another major air pollutant, by nearly half from 2013 to 2015, government data showed.

The study recommends that regulations should aim to reduce the number of private cars clogging the streets of the capital because vehicle emissions are a major source of air pollution.