By Dong Jing and Wang Yuqian 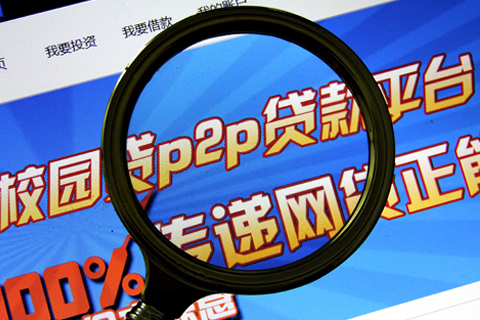 (Beijing) — Three months after Beijing imposed strict rules on the peer-to-peer (P2P) lending industry, many firms have made little progress in meeting some of the key requirements.

One major problem they have is ensuring borrowers don't exceed newly imposed credit limits, industry experts said. Another is that many P2P firms haven't met the new requirement to find a bank to be the custodian of the funds they get from their client investors, who are essentially the lenders.

"Whether it's the ceiling on loans or the requirement for a custodian bank, the obstacles are huge and will shut out many firms," the manager of a small P2P firm in Beijing said. "I feel like I've done nothing but focusing all of my energy on complying with the rules ever since they came out."

P2P firms act as intermediaries that allow investors to lend money to borrowers directly via the Internet outside of the banking system. The industry boomed but also transformed into a channel through which companies could get loans quickly and skirt restrictions imposed by the government as part of its economic policies, such as reining in loans to property developers.

The new restrictions are part of a policy Beijing released in August to rein in P2P loans in an industry that had minimum supervision and was plagued by fraud and inappropriate and risky fund-management practices.

Among the many restrictions the policy introduced was a ceiling on how much a person can borrow through P2P platforms. The limit for each individual through one website was set at 200,000 yuan ($29,200). A person cannot borrow more than a combined 1 million yuan from P2P lenders regardless of how many platforms they use.

The policy gave all P2P firms until the end of August 2017 to ensure compliance.

Even with the grace period, however, about 90% of the existing platforms will likely have to shut down, primarily because of the loan-size requirement, said Xu Jianwen, founder and CEO of rrjc.com. Xu's P2P lending website is ranked by industry data provider wdzj.com as among the country's top 50 such sites.

A recent report by Yingcan Zixun, a research firm related to wdzj.com, said that only 27% of the P2P firms they surveyed could have met the requirement to cap loans at 200,000 yuan for each borrower. Firms that fell short faced pressure to reform their business and focus on small-sum, consumer-type loans, it said.

A bigger headache is complying with the limit for combined loans across platforms because there is no system that allows P2P firms to share data on borrowers.

"It's beyond our capability to ensure a borrower does not take out more than 1 million yuan in loans through more than one platform," said Wang Xian, an executive of a P2P firm in Wuhan. "Right now we've settled for letting borrowers sign a note that says they are not borrowing more than they should, but there's no way for us to verify whether that's true."

Apart from ceilings on each loan, all P2P firms are also required by the new policy to find a custodian bank for the funds they receive from lenders, an arrangement that the policymakers said could help prevent fraud and misuse of funds. This particular requirement had been raised in a previous policy made last year targeting Internet finance in general. After more than a year, however, only a small portion of P2P firms have been able to find a custodian bank.

Most banks were just paying lip service to cooperating with P2P firms because it means taking on risk that outweighs the potential benefits, according to several bankers and P2P firm employees.

As of Oct. 19, only 71 of the 1,860 operating P2P firms had found a custodian bank for their clients' investment, according to wdzj.com.

"The attitude of most banks on this has been ambiguous," an executive of a Beijing P2P firm said. "They have appeared enthusiastic about cooperating with P2P firms to show they heeded the government's call, but in practice they have not taken any real action."

Many P2P firms could not find a custodian bank because of high standards the banks set for their capital and performance. Banks have to be selective because providing custodian service to a P2P firm means sharing its risk to some extent, a manager from Everbright Bank said.

Meanwhile, the fate of most P2P firms still hangs in limbo. Apart from a few city commercial banks, "almost no bank wants a part in the business," said Li Liyu, a former executive of a Shanghai P2P firm, who left the position recently.