By Chen Na and Huang Ziyi 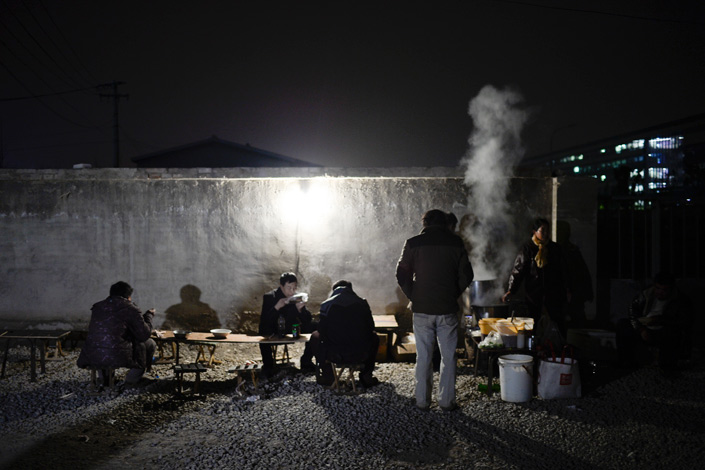 Residents of Houchangcun village, most of whom are Didi drivers, eat dinner in the night market on Nov.13. The village, in Beijing's Zhongguancun district, is surrounded by giant Internet companies, a famous primary school and luxury residential areas. Photo: Yang Yifan/Caixin

(Beijing) — Winter came early to an urban village on the outskirts of Beijing, whose 5,000 residents have been losing their jobs for months as the city government redefines ride-hailing and the sector's biggest company cuts driver subsidies.

"Look over there — those men are all Didi drivers," said a fruit vendor in Houchangcun village in the northwestern part of Beijing, pointing at a group of men playing poker under a tree during the daytime.

More and more Houchangcun residents, most of whom come from the southwest municipality of Chongqing, have been sitting idle at home in recent months as subsidies gradually dry up and the government tightens regulations on the industry under pressure from state-owned taxi operators.

Nestled in Beijing's buzzing Zhongguancun district — an area for a growing class of tech entrepreneurs and venture capitalists — the 15,000-square-meter Houchangcun has become home for migrant workers from Chongqing's Pengshui county who left their hometown in the early 1990s in pursuit of a better life.

Most of the migrant workers built a life in the city by working for moving companies. Years of physical work wore down their bodies. Zuo, a 46-year-old driver for Didi who gave only his family name, rolled up one of his trouser legs to show a bulge on his knee, an injury he suffered from carrying heavy loads.

So when ride-hailing superpowers like Uber Technologies Inc. and Didi Chuxing doled out generous subsidies to drivers in the past few years in an effort to secure a slice of the cutthroat industry, Zhu and his fellow villagers saw an opportunity to improve their quality of life. Since the Beijing government has a strict quota on local license plates, they returned to Chongqing, took out loans, bought cars there and drove back to Beijing, joining the tens of millions of ride-hailing drivers in the country.

However, subsidies ebbed after Uber sold its Chinese operations to Didi in exchange for a 20% share in the merged company. Li, another resident of Houchangcun who goes by his family name, saw his revenue drop from more than 10,000 yuan ($1,450) a month to about 5,000 yuan. He quit earlier this year.

He is not alone. Li said more drivers have quit, especially since local governments decided to limit the pool of drivers in the industry, dealing another blow to Houchangcun.

Draft rules issued by scores of cities, including Beijing, in the past month state that only holders of local household registration permits, or hukou, would be able to apply for permits to be drivers for private ride-hailing services. Additionally, cars should be registered in the city in which the drivers are working. Some cities also planned to require ride-hailing vehicles to have a minimum wheelbase, which would rule out some small compact cars.

Zuo said he understood the requirement for locally registered vehicles if the government's intention is to solve traffic congestion in the city, but prohibiting migrant workers from working in the industry would be "too strict."

"If the government must have a requirement for hukou, how many Beijing natives are willing to drive cars for car-hailing companies?" Zuo asked, adding that migrant workers constitute the majority of drivers.

Li, Zuo and their fellow villagers don't know what the future has in store for them. Compared with other Houchangcun residents, Zuo considers himself lucky because he has only four more months of loans to pay for the cars. But some of his friends just took out loans to buy cars at the beginning of this year to work for the industry. "Now the only way they can pay back is to drive 'black taxis,' " Zuo said, referring to unlicensed private taxilike cars that are neither registered nor have insurance.

He considered moving back to Chongqing and continuing driving for Didi, but his hometown seems far away. After living two decades in Beijing, these drivers have perfected their Mandarin and familiarized themselves with every boulevard and alley in the city.

"I'm so used to life here now," Zuo said. "There is no hometown that I can go back to anymore."