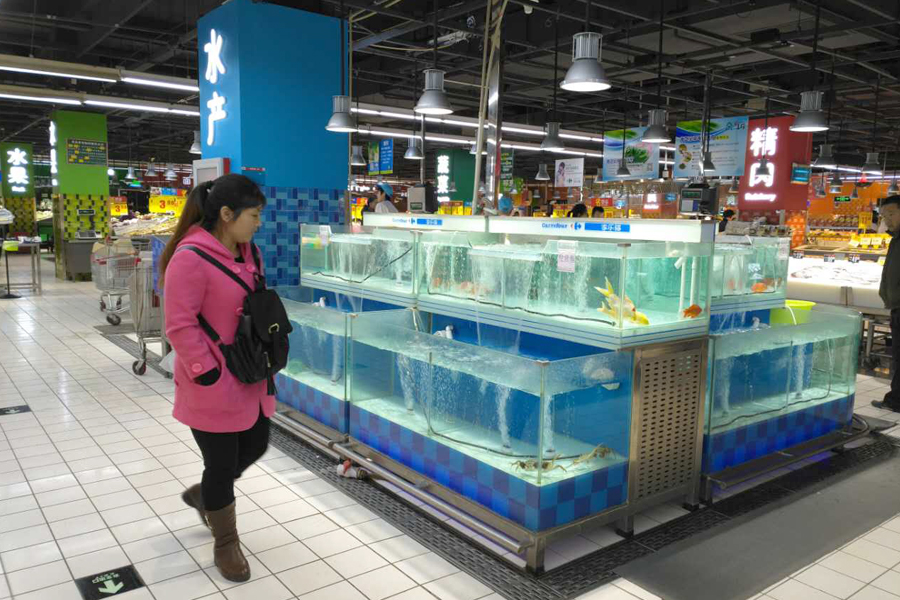 Live freshwater fish have been disappearing from Beijing's supermarkets — a phenomenon that the China Food and Drug Administration (CFDA) attributes to leaked news of impending food safety inspections.

Sixteen out of 20 supermarkets visited by Beijing Youth Daily reporters in the city's Tongzhou district did not have any stock of live fish. These included branches of major chains like Wal-Mart, Carrefour, Yonghui and Wumart.

Even shoppers at upmarket chain BHG, which runs supermarkets in luxury malls like Taikoo Li Sanlitun and the SKP Mall, have been having a hard time finding live fish. Staff at the Xizhimen BHG branch in central Beijing told Caixin reporters that they received instructions to stop selling live fish a few days ago, but were not told when sales would resume.

CFDA representatives told Caixin that the vanishing fish were a sign that supermarket operators had found out about the agency's upcoming aquaculture inspections.

On Thursday afternoon, the CFDA published a copy of an internal document dated Nov. 3 detailing its plans to inspect aquaculture products in 12 cities, including Beijing. Inspections were to include checks for chemical contamination in fish.

"The leak shows that our agency has some difficulty in keeping things secret," said one CFDA staff member, adding that supermarkets' instinctive response to news of inspections is to pull stock off the shelves.

The CFDA maintains that the current situation is not caused by tainted fish.

Contaminated seafood has been a major source of anxiety in the past for Chinese consumers. Earlier this month, Jiangsu provincial authorities suspended exports of hairy crabs after finding high levels of carcinogens in some of them.

In 2010, the local government in Shanghang county, Fujian province, had to pay farmers for more than 1,000 tons of fish after a toxic mine leak in the Tingjiang River. Authorities bought and destroyed the fish to stop them from being sold to consumers, the Global Times reported.

The municipal Beijing Food and Drug Administration (BFDA) also chimed in on the matter, publishing a Sina Weibo microblog post on Wednesday saying that rumors about polluted water tainting the city's fish supply were false.

The BFDA cited a Wumart food safety manager who claimed that supermarkets in the city have stopped selling live freshwater fish like grass carp and perch because customers have changed their buying habits and now prefer refrigerated or frozen fish.

The recent dearth of fish was due to year-end adjustments based on consumer habits observed over the year, and was part of normal business behavior, the Wumart manager said.

When asked about their empty seafood tanks, Jingkelong staff at the midpriced chain's Sanlitun branch told Caixin the supermarket was due to receive new stocks of live fish on Saturday.