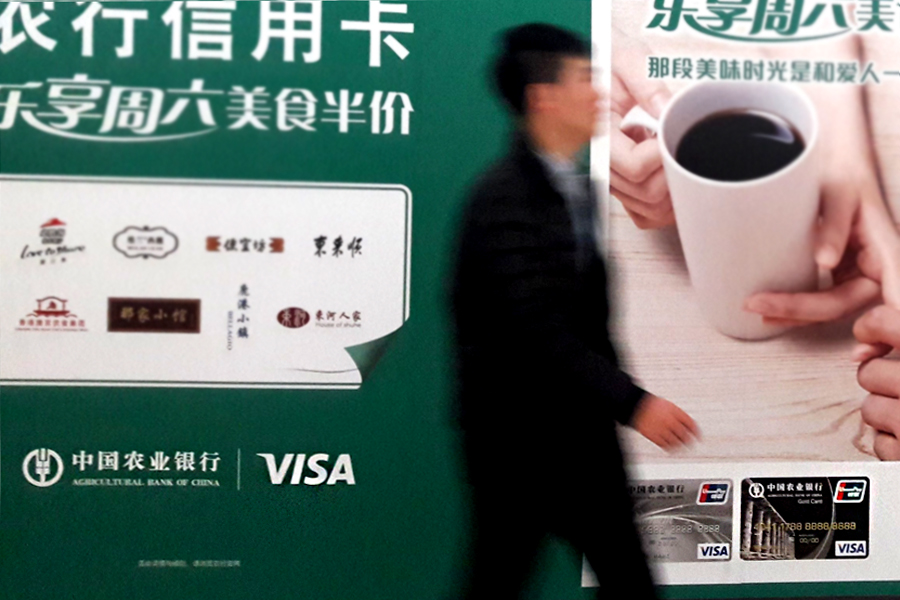 (Beijing) — The People's Bank of China (PBOC) has stepped into the turf war between China UnionPay, the country's only authorized bank-card payment system, and foreign rivals such as Visa and MasterCard, as the central bank took action that boosts UnionPay's dominance in its market.

The PBOC is discouraging the issuance of dual-logo bank cards, the result of which will be that UnionPay now will clear both domestic and overseas payments made through most Chinese credit cards. The PBOC is also cracking down on attempts by international card companies to indirectly offer yuan clearance.

PBOC officials last week summoned executives of several commercial banks and told them to phase out all dual-logo cards, which carry the logos of both UnionPay and a foreign player such as Visa or MasterCard. The banks must replace such bank cards with a single-logo card of a company authorized to clear yuan-denominated payments once the cards expire, sources who were part of the meeting told Caixin. UnionPay currently is the only entity licensed to clear yuan-denominated payments, although the government opened up the market to foreign players in June.

The restriction comes as UnionPay expands abroad and competes with foreign bank-card companies to clear overseas payments. Currently, someone with a dual-logo card issued by a Chinese lender can choose to clear their foreign currency payments with either UnionPay or a foreign clearance service.

But several cardholders said that because UnionPay has already expanded its global presence to 160 countries, including the U.S. and U.K., the second, foreign-company logo on many Chinese bank cards has become unimportant.

The central bank also rapped Chinese lenders for turning a blind eye to activities of foreign bank-card companies that have tried to skirt yuan-clearance regulations when processing payments in China.

Under current regulations, transactions conducted by foreign bank-card associations that have not acquired domestic bank-card clearing licenses should be denominated in foreign currencies, and sellers who accept foreign cards must pay 2% to 4% in commissions per transaction to have the payment clear. Many Chinese merchants are reluctant to accept credit cards bearing only the logo of a foreign card company for this reason.

To get around this issue, Visa and others have been using exchange rates of the Chinese banks they work with to convert the values of foreign-currency-denominated payments to yuan, and allowing settlements in yuan. This way, merchants need to pay only 1% of the transaction value as commission. But this indirectly allows foreign bank-card operators to engage in the yuan-clearance business in China without a license.