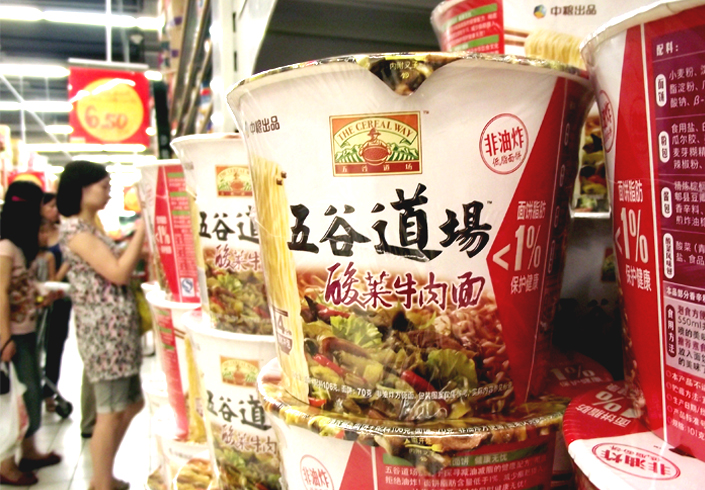 (Beijing) — A shriveling appetite for one of China's most popular snack foods, the instant noodle, is prompting one leading player to sell off that part of its business, as another reported soggy sales in its latest financial report.

The waning fortunes of cheap instant noodles, known locally as fangbian mian, is the result of rising Chinese incomes that are fueling demand for higher-end, more-nutritious products. Shifting tastes have also hit other cheap-eats purveyors, prompting fast-food giants McDonald's and KFC to reinvent themselves as more-upscale dining options.

Leading noodle maker Tingyi (Cayman Islands) Holding Corp. reported this week that revenue from its core noodle business slid 12% in the first nine months of 2016, the steepest drop among all its units. That drop led to a broader 9.4% decline for Tingyi's overall revenue, which fell to $6.9 billion in the same period.

Another food giant, the state-owned China National Cereals, Oils and Foodstuffs Corp. (COFCO), said it will sell its instant-noodle subsidiary, Wugudaochan, due to the unit's sluggish performance. COFCO said the unit lost 192 million yuan ($27.7 million) last year and 50 million yuan in the first three quarters of 2016.

COFCO's sale will include equity of the noodle affiliate, according to a statement issued by the company on the Beijing Equity Exchange announcing the sale.

Liu said the popular snack food may also be suffering due to speedier travel times in an era of growing air and high-speed rail trips, since instant noodles are a major supplement during long train rides in China. The recent rise of home-delivery food services, which are both convenient and offer far more options, has also undermined the standard noodle.

Instant noodle sales grew steadily in China over the last two decades, cresting in 2013 when 46.2 billion packs of the snack food were sold, according to ZhiYan Consulting. But sales have dropped for the two years since then, and were down more than 10% from the peak to 40.4 billion packages last year.

An earlier version of this story incorrectly stated that Wugudaochan had 53 million yuan in debt.