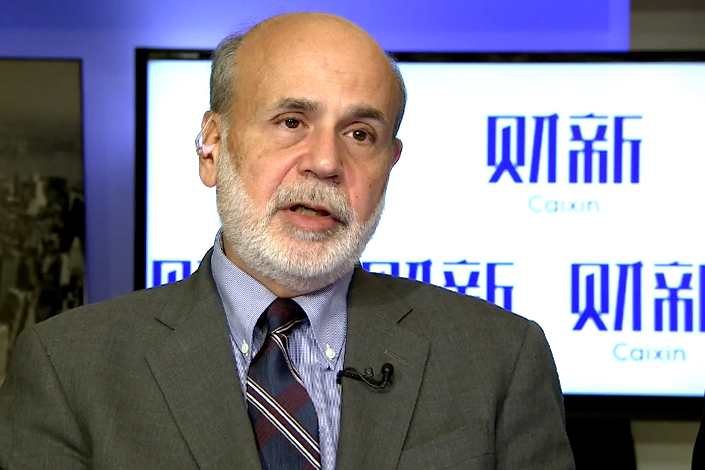 American economist Ben Bernanke, the chairman of the Federal Reserve from 2006 to 2014, gives a speech via a video connection at the seventh Caixin Summit on Friday. Photo: Caixin

(Beijing) — China should put reforming its economy — which is crucial to achieving sustainable growth and boosting investor confidence — ahead of its ambition to turn the yuan into an international currency, said Ben Bernanke, the former chairman of the U.S. Federal Reserve, on Friday.

Beijing has been keen to strengthen the international role of its currency. Most recently, in October, the yuan was included in the currency basket of special drawing rights (SDR), a reserve asset of the International Monetary Fund.

But Bernanke, speaking by video link from New York to the annual Caixin Summit, said that China should focus on its economic restructuring to beef up investors' confidence in growth, and keep money in the country.

"China will probably need to step back a little bit from the desire to have a global reserve currency," he said. "I think what is more important for China is to achieve the reforms and to worry about the international role of the renminbi at a later time."

The yuan has weakened significantly against the dollar over the past year while China's foreign exchange reserve has shrunk to $3.12 trillion in October from an all-time high of $3.99 trillion in June 2014, partly because the government sold dollars in markets to prop up the yuan's value.

Authorities have also stepped up measures to restrict overseas investment due to growing capital outflow pressure.

Bernanke said more could be done, such as relying more on fiscal policy rather than monetary easing to avoid lower interest rates that will fuel capital flight.

"The fundamental confidence in China's reforms underlines the strength of the renminbi," he said.

The yuan will certainly have to bear the brunt "if people lose confidence in reforms and therefore in sustainability of Chinese growth," he said.

The country has made some progress in shifting its growth model away from one driven by exports and investments to rely more on consumption, as underlined by the increasing proportion of services in the economy, Bernanke said.

"But there are risks. In particular, China will have to manage the large amount of credit that's been growing," he said. "It is going to have to manage bubbles that we've seen in some property areas." Bernanke also pointed to other problems, such as excess capacity in heavy industry and inefficient state-owned enterprises.

China in recent years has depended heavily on debt-fuelled infrastructure projects — often backed by the government — and an overheated property market to stimulate slowing expansion.

Borrowing in the country totaled 168.48 trillion yuan ($24.5 trillion) at the end of last year, or 249% of gross domestic product, according to a report released in June by the Chinese Academy of Social Sciences, a government think tank.

This credit binge also pushed housing prices to surge this year, and a number of cities have been forced to tighten down-payments and mortgage rules to calm the market and contain risks.

Addressing concerns that U.S. President-elect Donald Trump has threatened to name China as a currency manipulator, Bernanke said the Asian giant's recent cutting of U.S. treasury holdings would probably make that legally hard to do.

One of the conditions specified by U.S. law for a country to be identified as a manipulator is that it needs to be acquiring a lot of reserves to keep the value of its exchange rate low, he said.

"China is actually losing reserves — it's been selling U.S. treasuries. So, it doesn't seem to fit the technical definition of manipulation," he said.