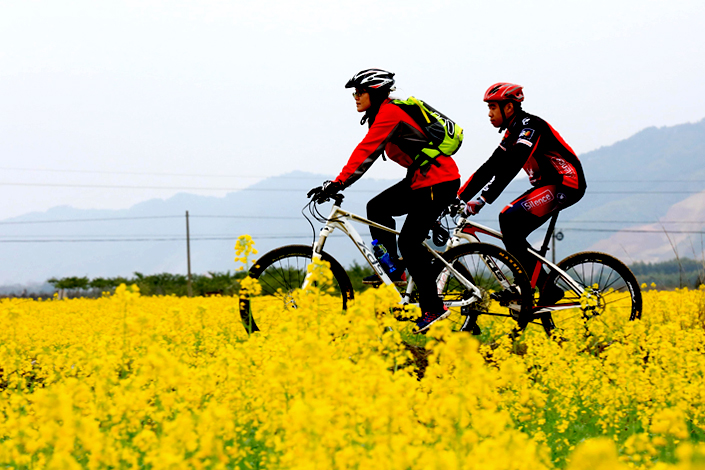 (Beijing) — Real estate giant and entertainment aspirant Dalian Wanda Group has announced it will stage a major new cycling tour in scenic Guangxi province, in its second major domestic initiative this year to build up a global sports business.

Wanda and its billionaire chairman Wang Jianlin made their original fortunes in China's booming real estate market, but are attempting to diversify into entertainment with billions of dollars in purchases and new developments over the past two years. That drive includes major acquisitions in movie production and cinemas, as well as theme parks and sports.

The new Tour of Guangxi cycling event will take riders through a southern Chinese province that is home to Guilin, known for its craggy mountains and considered one of China's most scenic cities. Wang said he aims to raise the event to the level of the Tour de France, considered the world's premier cycling tour, within five years.

The tour will last for six days and cover six stages over about 1,000 kilometers, with a starting line in the seaside resort city of Beihai and finish line in Guilin. It has been authorized by the International Cycling Union, which also sent a representative to the launch event. Air conditioner maker Gree will become the event's first major sponsor under a five-year deal.

Announcement of the event comes after Wanda said in July it would launch a world-class soccer tournament, the China Cup, which would include national teams from Europe and the Americas. The first edition of that event is set for January, also in the Guangxi capital of Nanning. Wanda said it was seeking the endorsement of the Asian Football Confederation and the global Federation Internationale de Football Association (FIFA) for the event.

Wanda has made a number of major global sports investments over the past two years, including its $1.2 billion purchase of European sports marketing firm Infront Sports & Media AG, and its $650 million purchase of the organizer of the Ironman Triathlon event. It also bought 20% of Spanish soccer club Atletico Madrid last year for 45 million euros ($47.8 million).

The company has previously said it will set up a headquarters for its sports business in the southern city of Guangzhou. That business complements its other related moves into the movie, cinema and theme park businesses, as it attempts to build an entertainment empire to rival that of the Walt Disney Co.