Online Video Faces Tough Sell with ‘Buy as You Watch’ 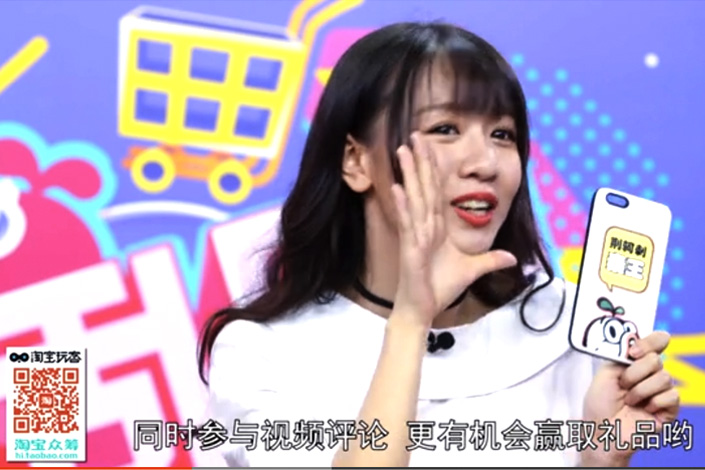 Caixin">
A screenshot of a Youku video program shows a hostess selling a cellphone case using a “buy as you watch” business model. Photo: Caixin

(Beijing) – They employ thousands and boast state-of-the-art facilities like film production studios and video-on-demand data centers. But to financial analysts, China’s online video services are little more than black holes for investor cash, with no hope of turning a profit anytime soon.

The profit challenge comes despite more than a decade in business and billions of dollars from eager investors hoping for big returns. The problem lies in the business model, say analysts, and the video companies’ overreliance on advertising as their main revenue source. Until that changes profits won’t be coming anytime soon, said Wang Ran of CEC Capital.

“Though advertising has for the most part migrated online, none of the video sites have begun making money,” he said, a fact that video sites know quite well and are trying to address by exploring new business models.

One area where companies see the biggest promise is e-commerce, and tying product sales to items featured in online movies and TV shows. E-commerce giant Alibaba may have had that vision in mind when it bought Youku Tudou, one of China’s leading video sites two years ago for $4 billion. At the time, excited investors thought the joining of such giants would finally create a business model that could lead video into the land of profits.

Imbued with a new sense of purpose, the pair proclaimed they could find the elusive profits by bringing together merchandise and video in a “buy as you watch” business model. They envisioned a shopping utopia where soap opera fans could click on a chic necklace, fancy gadget, or perfect shade of lipstick being sported by an actor, and make their purchases without ever leaving the screen.

But what sounded good in theory has been slow in moving into practice.

The pair quickly acquired an image recognition company to help match items in a video with online merchandise. But a source told Caixin that “progress was slow because of the difficulty in ironing out a feasible technical solution.” Nearly two years after the vision was announced, “buy as you watch” is still a work in progress, said Deng Yifei, Youku Tudou’s head of e-commerce.

Deng, a seasoned e-commerce veteran who guided e-commerce site Dangdang’s apparel business to a firm footing, said the engagement process needs to be longer and get viewers more involved with featured merchandise from an earlier stage.

“‘Buy as you watch’ was never meant to be simultaneously shopping and watching a drama on the same screen,” she said. Instead, she explained, the actual shopping process might begin much earlier with a film’s promotion and end after the viewer finishes watching. Some purchases inspired by the show might not even come until much later.

“We will work with brands and manufacturers to design custom products that will go into the show,” she said. “This way the drama will be able to lend added value to merchandise, this is why we can create items that become ‘all the rage’, and not plant ordinary products into shows.”

“Think of it as viewers referring to dramas and reality shows as a shopping guide,” she added.

“Using videos as a shopping guide is still at its fledgling stages, with a very low conversion rate”, says video industry analyst Xiong Fei, referring to the ratio of buyers to viewers. “Platforms still depend heavily on advertising and paid content for revenue.”

China’s online video industry has more than a decade of history, and Youku Tudou itself was formed through a merger of the industry’s two largest players. Other major services include iQiyi, PPTV, LeTV and Sohu video, all of which are believed to be operating at a loss. Youku Tudou is the only one of the group that was ever publicly traded, and reported an 837 million yuan ($120 million) loss for 2014, its last year as an independent company.

Other online video companies have experimented with different business models, including more conventional e-commerce shops and paid content. One of those, Baidu-backed iQiyi, has had more success with an e-commerce model that includes a separate online store selling merchandise used by actors in popular movies and TV series. But even iQiyi posted a net loss of 2.4 billion yuan last year due to sharply rising costs, though its CEO told Caixin in September it could become profitable as soon as 2018.

Back at Youku Tudou, despite slow progress on the “buy as you watch” model, the company is holding out big hopes for an edgy comic series called Baozou, one of its first actual productions using the in-program buying feature. Deng would not share sales figures for products featured in the series, but conceded that the progress would be gradual.

Another employee who spoke on condition of anonymity was more blunt: “Sales aren’t going to be huge. After all, people come to watch videos, not shop.”

Youku parent Alibaba is making its own efforts to help boost Youku Tudou through its own popular Taobao C2C marketplace, hoping to bring in film-related revenue from that end. Certain brands, like clothing maker Bestseller have been integrating short videos onto their product display pages, which vice president Zhang Yixing sees as a major trend.

But most other shops on Taobao are still watching from the sidelines, waiting for the day when videos prove to be more effective in promoting merchandise. When browsing through a plethora of similar items, most shoppers lack the patience to watch videos, and attaching a video seems to have little effect in driving sales, analysts said.

E-commerce is one of the few places where consumers are willing to spend big money online, and thus seems like one of the best bets for helping video companies find their way to profits. But it’s still unclear if “buy as you watch” will become the ultimate business model, due to its uneasy status in a realm that is neither pure video nor e-commerce.

Analyst Xiong believes that integrating e-commerce into videos could easily end up turning online programs into little more than TV shopping guides, which wouldn’t appeal to most ordinary viewers. “Getting people to shop while watching a video combines two decisions, one passive and one impulsive, meaning that the content has to be really good,” she said.