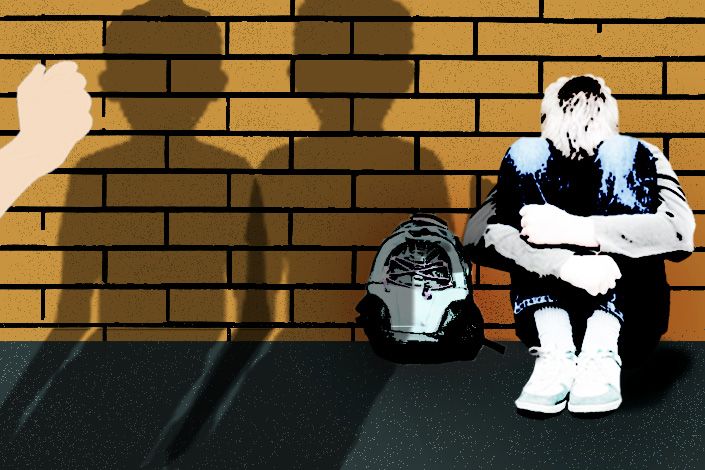 (Beijing) — Chinese social media has been buzzing about how education authorities handle bullying, after a mother accused one of Beijing's most popular primary schools of trying to downplay an incident as merely a prank that went too far.

In an article published on WeChat on Thursday, a mother of a 10-year-old student at Zhongguancun No. 2 Primary School said her son was attacked by two of his classmates in a school restroom on Nov. 24. The two boys allegedly put an overturned trash can over the victim's head, leaving him covered in soiled toilet paper.

Thousands of commentators have said the attack of the fourth-grader put the spotlight on the widespread problem of bullying that has often been ignored by educators due to a lack of awareness about its effect on children's mental health.

The mother said the family chose to share their story online after three meetings with school authorities, during which the officials refused to acknowledge the case as an act of bullying. Instead, the school called it a prank taken to an extreme, the mother wrote.

The boy's father, who only gave his surname, Wang, told Caixin that the two boys involved in the attack had called his son abusive nicknames for over a year.

School management had rejected the family's request for an apology from the two boys who carried out the attack and help from their families to settle the 10-year-old's medical bills, the mother wrote.

The mother wrote that her son had been traumatized by the attack, and that a psychologist had diagnosed him with an anxiety disorder.

Education authorities in Haidian, one of Beijing's most competitive school districts, said on Sunday that they were looking into the matter and pledged to address the issue of bullying in schools.

The mother wrote in her article that the school principal had yelled at her because the family had referred the case to the Haidian District Education Bureau. Repeated calls to the school to verify the claim went unanswered.

However, the school management, in a statement on Saturday, said it will take legal action against those "who have made untrue claims."

The boy's father told Caixin that he had audio recordings of what transpired during the three meetings with school authorities.

By taking this incident lightly and even dismissing it as a form of bullying, the school has tried to skirt its responsibility, said Shen Xu, who runs Reduce School Bullying, a non-governmental advocacy group.

"What school operators should do is to help bullies understand the harmful effects of their behavior," Shen said.

Bullying is a widespread problem in Chinese schools and universities. In the latest high-profile incident, three high school seniors were sentenced to six to eight months in prison last month for bullying a 15-year-old girl. The trio had slapped the girl dozens of times in front of a crowd of students in April after they caught her taking photographs of two other students kissing. The Ministry of Education launched a national campaign last year to curb bullying in schools last year.