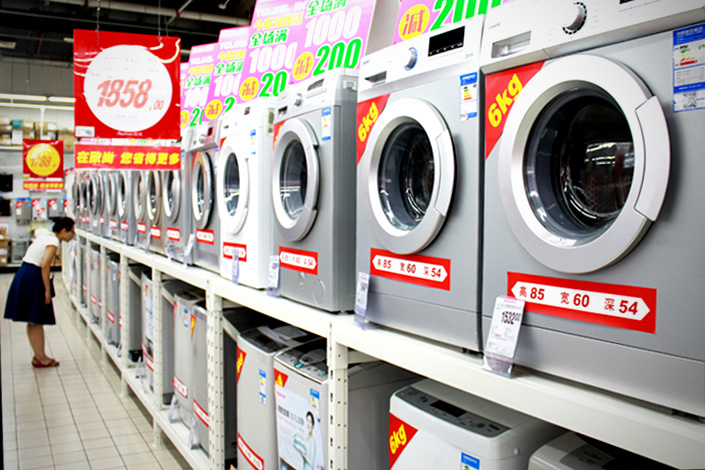 Front-loading washing machines are on display in an appliance store in Nanjing, Jiangsu province, on Oct. 15. Photo: Visual China

Industrial output gained 6.2% from a year earlier in November, according to data released by the National Bureau of Statistics (NBS) on Tuesday. Meanwhile, retail sales rose 10.8% to 3.1 trillion yuan ($449 billion), the highest growth this year, the NBS said.

Both figures beat economists' projections from a Caixin survey by 6% and 9.9% respectively.

Fixed-asset investment, a gauge of infrastructure spending, rose 8.3% in the first 11 months of this year, the same pace as in the first 10 months. State-owned companies drove the gain with a 20.2% jump in investment, while private investment increased only 3.1%.

China's economy has grown at a steady 6.7% in the first three quarters as it tries to reach its official growth target range of 6.5% to 7% for 2016.

The latest economic figures are a positive indicator as China strives to meet its annual GDP growth rate, according to Julian Evans-Pritchard, Capital Economics' China economist.

The positive data "suggest that China is on track to end this year on a strong note," Evans-Pritchard said in a report on Tuesday.

As China transitions from an industrial to a consumer-based economy, a rise in retail sales growth underpins this view.

The pickup in retail sales "may have got help from the online sales festival on Nov. 11," Zhao said.

However, this positive outlook is marred by a property sector that faces a correction following the introduction of recent cooling measures.

Property investment grew 6.5% in the January-to-November period to 9.3 trillion yuan but dropped from 6.6% for January through October. This slowdown in November reflected the impact of policy tightening measures on the real estate market, which were likely to add downward pressure to economic growth in coming months, Zhao said.

Housing prices in major Chinese cities skyrocketed earlier this year after investors poured money into the real estate market, following a meltdown in the stock market last year. In a bid to deflate a possible looming bubble, regulators have taken a variety of measures, including tightening home purchasing rules and ordering banks to curb housing loans, to cool the market.

While China may be on track to meet its GDP growth target for this year, next year will see growth slow, according to Evans-Pritchard.

"On balance, today's data suggest that China's recovery remains intact heading into 2017," said Evans-Pritchard. "However, with credit growth now cooling and the property sector facing a correction, we expect growth to begin slowing again next year."