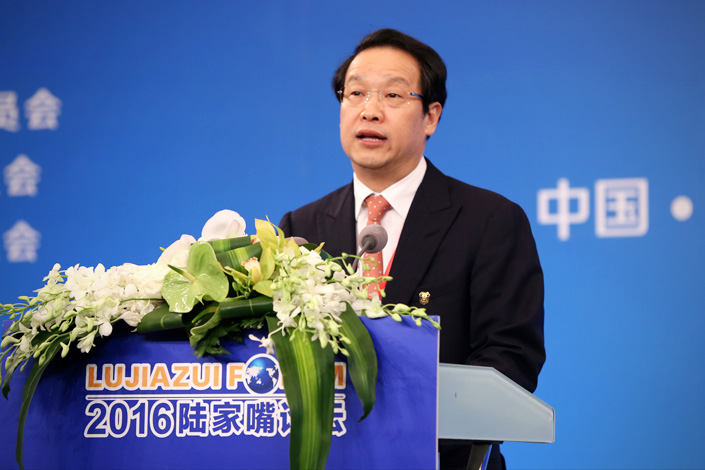 Xiang Junbo, chairman of the China Insurance Regulatory Commission and co-chairman of the 2016 Lujiazui Forum, delivers a keynote speech during the forum in Shanghai on June 12 Photo: Visual China

Analysts say that, to some extent, China's insurance regulator is playing catch-up, trying to rein in companies that had grown unchecked by selling dubious policies and making risky investment that put ordinary people's savings at risk.

Xiang said the commission will revise related regulations, reducing the ceiling on single-investor shareholding in an insurance company and examine more closely where funds used for purchasing insurance company equities come from. This is to prevent "ill-motivated" investors from getting into the insurance industry, Xiang said.

Separately, Caixin has learned that the regulator will soon release new rules that will require insurance companies to seek regulatory approval before acquiring public companies, and will limit the source of funds in major equity investments to their own capital.

The new regulations, according to a document Caixin has seen, would for the first time bar an insurance company from acting in concert with companies in other industries to acquire a public firm.

Companies that own an insurance subsidiary were often seen acting together in the acquisition of public firms. Bringing this phenomenon under better control will "protect the insurance company's funds from being abused or mistakenly used," CIRC vice chairman Chen Wenhui said.

Xiang's remarks come just days after the CIRC slapped several insurers with crippling restrictions on sales and investment and sent inspectors to examine some of their businesses on site.

Foresea Life Insurance, a subsidiary of Shenzhen-based real estate firm Baoneng Group, has been caught in the regulator's crosshairs. It rose to fame in China this year with its parent firm Baoneng's hostile takeover bid aimed at leading home developer China Vanke. Through Foresea and another subsidiary, Baoneng controls a quarter of Vanke and is its largest shareholder.

Anbang Insurance and Evergrande Life Insurance, both of which are also known for aggressive investments, were among those facing restrictions.

These are the same companies that have sometimes injected sudden volatility into the market and tested the regulators' limit this year, using premiums from so-called universal policies — which appeal to buyers as short-term investment tools rather than insurance — to grab public company shares in leveraged buyouts.

"Win, they get the profit; lose, the society bears the risk," said Yuan Yuwei, an executive at investment firm Hedwige. Leveraged buyouts are risky, and that's why they are often financed by junk bond investors in foreign countries, Yuan said. That's not the case with people who trust their money with an insurance company.

"Investors do not necessarily know the risk of how the insurers invest their money," said an official from the CIRC. The investors think the insurer will make sure they get repaid, but with the way some insurers have used their funds, "once there is loss, it will be beyond the insurer's ability to cover," the official said.