China Smog in November Worse Than Year Ago 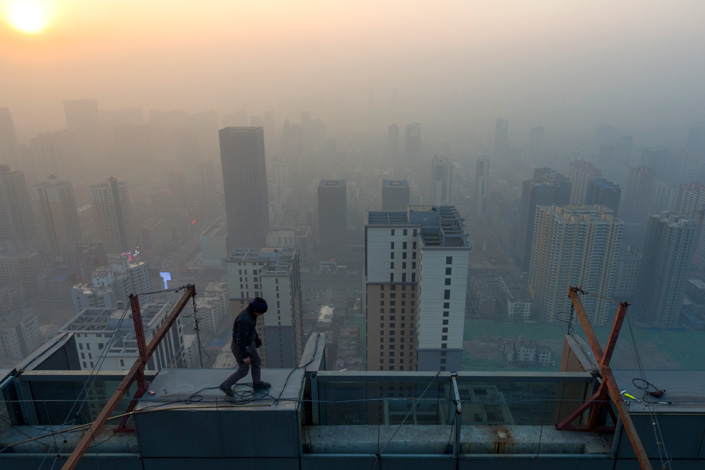 A steeplejack works at a construction site in Taiyuan, Shanxi province, on Dec. 4, when air pollution reached hazardous levels. The Ministry of Environmental Protection said that Taiyuan ranked 65th out of 74 cities in air quality from January to November this year. Photo: Visual China

(Beijing) — China's air quality deteriorated last month compared with a year earlier, with PM10 concentrations up by more than 20% year-on-year to 100 micrograms per cubic meter of air, the Ministry of Environmental Protection (MEP) said.

The level of PM2.5 — fine carcinogenic particulates smaller than 2.5 micrometers in diameter — across the country rose 7.4% to 58 micrograms per cubic meter of air in November compared with the same month last year, the MEP said, citing data it collected in 74 major cities.

The ministry attributed the deterioration to the three bouts of smog that hit Beijing, Tianjin and the surrounding province of Hebei last month, coinciding with three rounds of sandstorms in western China.

In Beijing, Tianjin and 11 cities in Hebei under the watch of the ministry, people enjoyed only 11 blue-sky days in November, down by nearly five days compared with the same month last year. A blue-sky day, when the air is considered "excellent" or "good," is defined as when the air quality index (AQI) is below 100.

PM2.5 levels in the areas rose by 8.5% year-on-year to 102 micrograms per cubic meter of air in November, while PM10 concentrations in 13 northern cities jumped by nearly a quarter last month to 169 micrograms from a year earlier.

Seven cities in Hebei, including Baoding and the provincial capital, Shijiazhuang, were among the top 10 most polluted cities in China last month.

The Chinese capital alone saw only 13 blue-sky days last month, down by one day from November 2015. The good news is that PM2.5 concentration on average last month was down by 15.3% year-on-year to 100 micrograms per cubic meter of air, according to the ministry.

Most of Beijing's air pollution originates from coal-burning at power plants, restaurants and even homes; emissions from motor vehicles; and dust from construction sites, the MEP said. Pollutants blown in from Hebei to the south of the city are also blamed for the foul air in the capital. But the ministry said that emissions from automobiles had become a leading cause for air pollution in Beijing though it has not been able to quantify the amount.

Beijing, Tianjin and Hebei, which are often shrouded in thick smog for days, increasingly rely on winter winds blowing north to south to blow away pollutants.

To tackle air pollution, Beijing city authorities will designate five "air flow corridors" for wind to enter the capital's downtown areas so that it can blow pollutants from coal-burning, vehicle emissions and industrial dust, The Beijing News reported on Wednesday, citing an official report to Beijing's northeastern Shunyi district government.

One of the 500-meter-wide corridors will be near the district's Chaobai River, according to the official document. High-rises will be banned in areas within the wind paths, the district authority said in the report.

Beijing lies on a plain with the Yanshan Mountain range to the north and Taihang Mountains on the west, which block the wind and trap pollutants, according to academics, including Chai Fahe, a deputy director at the Chinese Research Academy of Environmental Sciences. The reckless development of tall buildings only makes the situation worse, they said.