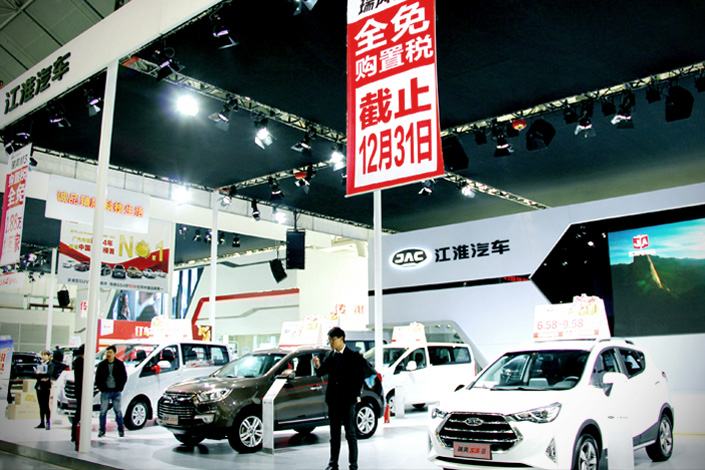 An automaker at the 2016 Nanjing International Automobile Exbihition in Nanjing, Jiangsu province, on Dec. 3 promotes small-engine cars by emphasizing the soon-to-end 5% preferential tax rate on vehicles with engines that are 1.6 liters or smaller. Photo: IC

(Beijing) — China will extend a tax break for buyers of small-engine cars by a year, as the nation aims to boost sales of more-efficient, less-polluting vehicles as part of a broader effort to clean up the nation's air.

But the new preferential tax rate was higher than one under the original incentive program dating back to last year. The higher tax rate sparked a selloff in shares of some of China's leading domestic car makers who had hoped for a continuation of the lower rate.

Under the new policy, cars with engines of up to 1.6 liters will be taxed at a rate of 7.5% from Jan. 1 through Dec. 31, 2017, according to a statement posted on the Ministry of Finance website. It added that the new rate had been approved by the State Council, China's cabinet.

Small-engine cars have been taxed at a preferential rate of 5 percent since October 2015, and many in the industry were hoping that rate would be extended after a deadline at the end of this month.

"It's disappointing that they've only extended it for a year," said Dong Yang, executive vice chairman of China Association of Automobile Manufacturers. "Such a policy encouraging energy saving and lower emissions should be a long-term target."

Shares of domestic car makers, which depend heavily on small-engine vehicle sales, dropped sharply over the last two days because of disappointment about the new rate. Hong Kong-listed shares of BAIC Motor Co. Ltd. and Geely Automobile Holdings Ltd. were both down about 6.5% over the two days, while those of Great Wall Motor Co. Ltd. were down 4.9%.

Car sales in China reached 24.9 million units in the first 11 months of the year, up about 14% from the same period a year earlier. Low-emission vehicle sales grew at an even-faster 22.5% over that period, fueled by the tax incentives, accounting for 72.1 percent of all passenger-vehicle sales.