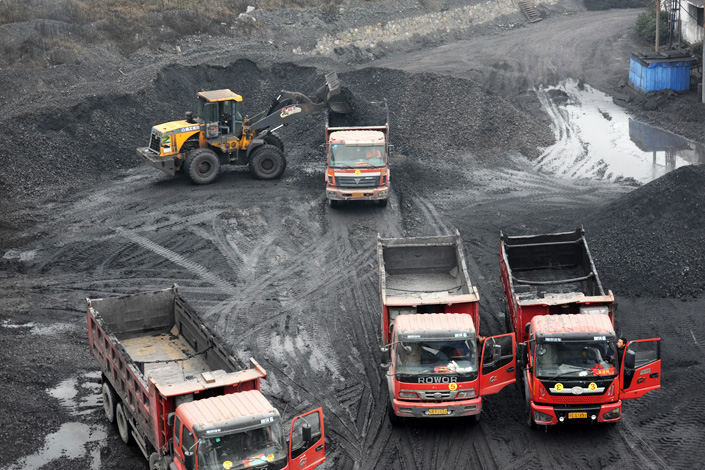 Coal is transported by trucks from a coal production base in Huaibei, Anhui province, on Nov. 17. Photo: Visual China

(Beijing) — The route to structural reform does not always follow a straight line.

China set a target back in February to cut 500 million tons of coal capacity over three to five years. Little did authorities imagine they'd be forced to backtrack within a few months to halt a surge in prices and counter a severe shortage of the fuel ahead of peak winter demand.

The quick policy retreat now appears to be working. The Bohai-Rim Steam-Coal Price Index (BSPI), which tracks domestic thermal coal spot prices at major ports in northeast China, has started to moderate after reaching multiyear highs earlier in the year. And coal futures prices have also given up some of their gains after the government cracked down on speculation.

Data from the National Bureau of Statistics show that the decline in national coal output narrowed significantly in November on a year-on-year basis to 5.1%. This is after plunging by as much as 16.6% in June.

But the unintended consequences of a well-intentioned policy highlight the difficulty of using traditional command-and-control tools in an increasingly market-driven economy.

At the time, the State Council's target of cutting coal capacity seemed logical and appropriate. Faced with sluggish demand, sagging prices, high inventories and overcapacity, the industry was struggling, and coal-mining companies' profits were suffering.

After the overall strategy was announced in February, the National Development and Reform Commission (NDRC), the country's powerful planning agency, rolled out a specific plan for this year, targeting a cut in coal capacity of 250 million tons.

To help reach that goal, coal producers were told to cut the number of working days from 330 to 276 days. As a result, from April to October, output slumped by more than 10% per month on a year-on-year basis.

"Who could have imagined that a rule to reduce working days could actually be followed by the coal producers?" said a person close to the mining industry.

Even so, the NDRC wasn't satisfied, and in August said it was stepping up checks after some provinces were found to be dragging their feet over closing capacity amid concerns about the effect on their respective local economies. By late November, the State Council declared victory, saying the target had been "basically" achieved, according to the official Xinhua News Agency.

The decline in production that accompanied the capacity cuts started to cause a supply gap, driving up coal prices. In September, the country consumed an average of 10.9 million tons of coals per day, while the daily supply was only 10.05 million tons, the NDRC said during a meeting with coal producers.

Meanwhile, a wall of liquidity hit the commodity futures markets as speculators started piling in in search of higher returns after prices hit rock bottom. Thermal coal futures traded on the Zhengzhou Commodity Exchange jumped more than 80% in the past 12 months, while coke futures on the Dalian Commodity Exchange soared by more than 170% since January and coking coal futures more than doubled, according to Wind Information, a data provider.

Spot prices also rose as it became apparent the industry was heading for a supply crunch. After declining for four years, the BSPI started to recover in late 2015. The BSPI rose more than 60% between January and November and hit 607 yuan per ton on Nov. 2, its highest point in nearly three years, before starting to moderate.

Xu Kunlin, deputy secretary-general of the NDRC, told a news briefing in November that the rebound in coal prices was a natural result of the government's supply-side structural reforms, although strong demand from power producers as they restocked in the runup to winter made matters worse.

If coal prices continued to rise "irrationally," they threatened to derail the government's drive to slim down the mining sector, Xu warned.

To add to the government's woes, a shortage of freight trains led to delays in transporting coal from mines. After years of breakneck growth, the railway industry had gradually reduced cargo capacity over the past three years in the coal-rich northern regions of Shanxi, Shaanxi and Inner Mongolia, a person close to the railway bureau in Taiyuan city told Caixin. As the need for freight trains dropped amid the economic slowdown, idle stock was mothballed to cut costs, he said.

But as demand for coal rebounded ahead of the winter months, the country faced a shortage of about 100,000 rail cars for coal transportation, according to Guo Yuhua, a senior official at China Railway Corp., operator of the country's passenger and freight rail systems.

The central government's crackdown on overloaded trucks on highways — a common practice among business owners in China to save money — also boosted demand for moving coal by rail.

Since September, the NDRC has held a series of meetings with coal producers and railway operators to find ways of easing the shortage and damping the surge in prices. That month, it decided to let some mining companies increase output, and in November it temporarily reversed its February ruling on working days, allowing mines that meet "work-safety standards" to resume working 330 days a year to increase output until March when the heating season ends.

The NDRC has also encouraged coal producers to sign medium- and long-term agreements with power generators to stabilize prices.

Two of the country's largest groups, state-owned Shenhua Group Corp. and China National Coal Group Corp., took the lead. On Nov. 11, they signed a one-year contract with the top five power generators to supply thermal coal for 535 yuan per ton when the BSPI price was 606 yuan per ton. Smaller mining companies followed suit.

China's commodity exchanges stepped in to deflate the bubble in futures trading, which was being fueled by leveraged bets by speculators. The Zhengzhou Commodity Exchange increased charges for trading thermal coal four times in less than three weeks in November, and the Dalian Commodity Exchange boosted fees for trading coking coal and coke futures.

China Railway has also been called in to ease the rail bottleneck. Guo, the company official, said it deployed 20,000 flatbed rail cars and another 20,000 open cars in November.

But despite all the government's efforts, Hu Wenqiang, deputy general manager of Shanxi Coking Coal Group Ltd., China's largest coking coal producer, predicted the coal shortage will persist for the next few months because the industry needs at least half a year to restart idled capacity.

Many producers are also reluctant to restart mining operations because they want prices to remain high, one person close to the industry told Caixin.

Concerns that the NDRC will reimpose the working-day limit once the heating season is over is also making some mining companies reluctant to bring mothballed capacity back into action, said Li Ting, an independent industry analyst.

The long-term solution may be to just let the market work, according to a senior government official working in macro-regulation who spoke on condition of anonymity.

The price surges this year "remind us that effective regulation must be market driven," he said. "Government agencies need to break free from this habit of resorting to intervention" when problems arise.