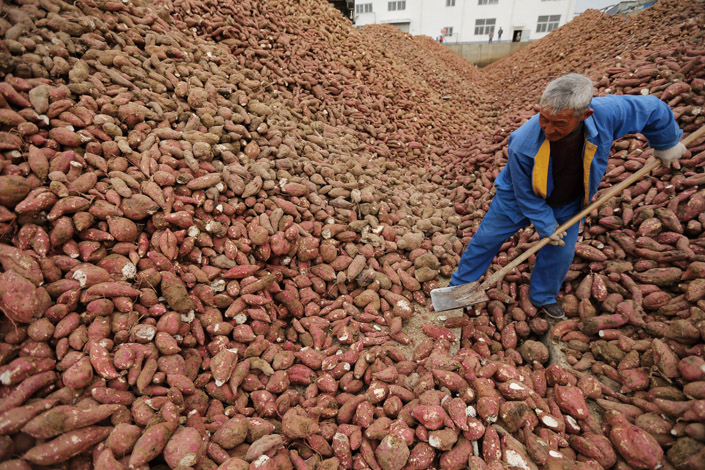 (Beijing) — China's top leaders have vowed to improve the quality of agricultural production and develop a more environmentally sustainable system as part of their agenda for next year.

While ensuring the country's food security, the central government has called on the agricultural industry to shift away from a system that focuses mainly on increasing output to one that pursues a better quality of agricultural produce, according to a statement released Tuesday night after the two-day closed-door Central Rural Work Conference.

The goal is part of the government's broader mandate to undertake supply-side reform in the agriculture sector, which now faces surplus grain stockpiles after 12 consecutive years of bumper harvests.

The government "won't pursue increased grain output next year," although Beijing will also prevent production from plunging, Agriculture Minister Han Changfu said in an interview with the official Xinhua News Agency after the conclave.

"Our country has a lot of average-quality agricultural produce, but not enough top-quality and branded products," Han said. As consumers develop a finer taste for agricultural products, there is a pressing demand to cut excess production in certain crops and focus more on upgrading quality, he added.

In particular, the government will reduce the production of corn, a major gain in China, Han said. Earlier this year, the Agriculture Ministry set a goal to cut corn production by about 4.9 million acres of farmland and it aimed to increase the cut to 6.6 million acres in 2017.

China's grain-reserves-to-consumption ratio currently is the "highest in the world," with total reserves — 80% of which is in state storage — being sufficient for the entire nation's consumption for half a year, Ma Wenfeng, an analyst with Beijing Orient Agribusiness Consultant Ltd., which is linked to the Agriculture Ministry, said in an interview in November.

The need to stockpile crops stems from the ruling Communist Party's belief that food security is the key to social stability. But industrial contamination of water and soil, along with the overuse of pesticides and fertilizer, has caused severe environmental problems, analysts said.

A vice minister of land and resources revealed in 2013 that about 8 million acres of the country's farmland had a "medium-to-high level of pollution." Official data showed nearly 20% of the country's arable soil contained higher levels of chemicals than allowed by national standards by the same year.

To address the problems, the government "should resolutely remove whatever needs removing," according to the Central Rural Work Conference's statement. For example, the government has reined in overexploitation of underground water for irrigation in the northeastern part of the country, particularly Hebei province, said Li Guoxiang, a researcher at the Rural Development Institute of the state-backed Chinese Academy of Social Sciences.

The determination echoes a June policy called for the central government to dole out subsidies worth nearly 1.5 billion yuan ($216 million) to farmers in a drive to restore the health of 1.01 million acres of farmland, including more than 191,000 acres in Hebei, Li added.

The agricultural minister also told Xinhua that the central government will expedite building a subsidy program to encourage farmers to grow crops in a more environment-friendly way.