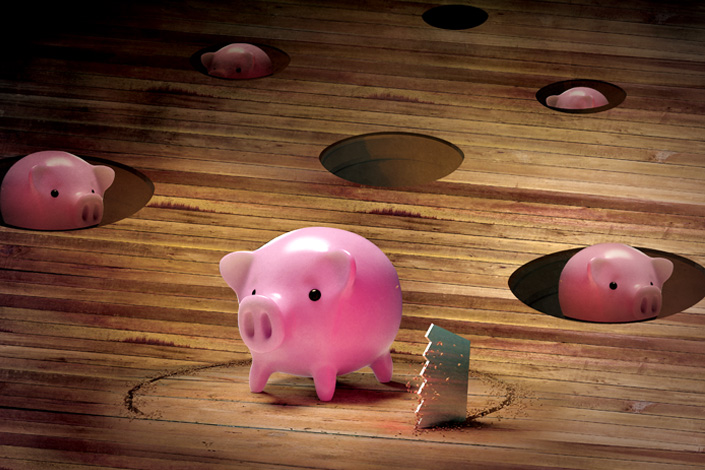 (Beijing) — The only thing as difficult as fathoming the depths of China's bad-loan pool is finding out how much to trust the data that has been collected.

That's the problem the government faced when it tried to decide this year whether to relax the requirement for provisions that banks must set aside to cushion the impact from non-performing loans.

As of September, commercial lenders in China have racked up almost 1.5 trillion yuan ($216 billion) in bad loans on their books, up from just over 400 billion yuan in late 2011, according to the China Banking Regulatory Commission (CBRC). Their share of total loans has increased from under 1% to 1.76%.

The CBRC requires banks to set aside provisions that equal at least 150% of their non-performing loans. The industry average stood at 175.5% at the end of September; however, some of the largest banks, including the Industrial and Commercial Bank of China (ICBC) and the Bank of China, have temporarily fallen short of the requirement.

Reducing the required minimum ratio would encourage some banks to increase lending — so goes the argument of many advocates.

The plea from bankers had been so strong that the CBRC actually wanted to heed the call and cut the ratio for at least some banks, although it didn't do so, according to sources close to the regulator.

The CBRC balked at the consequences, according to the sources, because a central bank survey in the coastal province of Jiangsu showed that local banks there were understating their bad loans by at least half.

Even that survey did not give policymakers an exact number on the volume of bad loans that banks had. Instead, it came up with a range, and even the most conservative estimate looked grim. The government gave up amending provisioning rules at the sight of the results, according to the sources.

"If the data on (bad loan) assets (reported by banks) were accurate, there would be enough provisions when we cut the provision coverage ratio to 100%," an official from the central bank, who did not want to be named because he was not authorized to speak publicly on the matter, told Caixin.

"But if they are not accurate," he said, "cutting the ratio would be putting the central government in a position to eventually foot the bill."

The two-month survey, completed before July, sampled several hundreds of billions of yuan worth of loans made by 15 large banks in Jiangsu, according to a source close to the central bank.

It found that the province's average non-performing loan ratio was more than 3%, almost twice the number the CBRC had based on data reported to it by banks, he said. He didn't say which month's condition the ratio reflected.

"This is not to account for the loans that banks had to treat as normal or pretend they had been sold or dealt with under local government's pressure," he said. "It considered only loans that had been overdue for more than 90 days and also loans in the 'special attention' category."

However, he continued, the problem is that "almost no borrowers that had loans in the 'special attention' category were still functioning, and those that had been 90 days behind on interest and principal payments might as well have been written off as dead."

The broad picture seemed bleaker when the regulators factored in the relative resilience of Jiangsu's economy compared with regions that rely more on coal mining, such as the central province of Shanxi, or on heavy machinery manufacturing, such as the three provinces in the country's northeast — Heilongjiang, Jilin and Liaoning.

Judging by even the lowest possible estimate, the lenders surveyed by the central bank in Jiangsu fell short on the provision requirement by far, according to the source close to the central bank. Whereas the requirement is 150%, he said, theirs were actually below 70% on average.

Investors are voting with their feet in the A-share market. Most of the 16 listed banks' stocks have been trading at a level below the value of their net assets — even during times when their profits were still growing rapidly — reflecting investor pessimism about the lenders' ability to handle bad loans.

For example, the largest of the lenders, ICBC, has a price-to-book ratio of 0.83, meaning that investors are willing to pay only 83 U.S. cents for each dollar of the bank's net assets. The discount reflects to a large extent that investors believe that the bank will need more than its announced provisions and profits to absorb the impact from bad loans.

Using this assumption, a research team at Guotai Junan Securities calculated that, in March, the stock price of the country's 16 A-share listed banks implied a combined amount of bad loans to the tune of 6 trillion yuan. That was 8.7% of their total outstanding loans at the time.

The good news, however, according to the firm and several other research units at different institutions, is that the worst times may be over, or at least soon will be.

For example, conditions in the Yangtze River Delta region, where Jiangsu is, have showed signs of stabilizing in 2015, according to Guotai Junan. Other areas will follow, it said.

China International Capital Corp., an investment bank, said the amount of non-performing loans may peak next year if the economy improves. Its optimism holds even in the scenario that next year's GDP growth, in nominal terms, continues to fall, as long as the slippage is not significant.